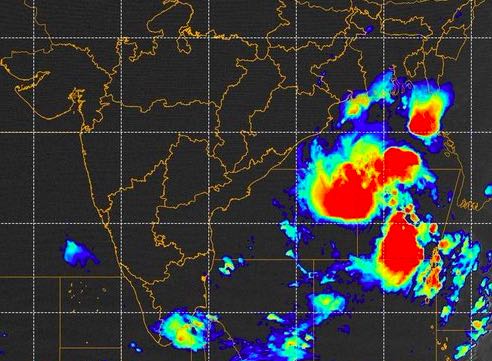 “The system will cross Bangladesh coast between Tinkona Island and Sandwip around early morning on October 25,” it added.

The cyclone will be named ‘Sitrang, if it intensifies into a storm.

The weather department has issued a yellow warning for heavy rainfall on Sunday and Monday in Odisha. Heavy rain is likely to occur at one or two places in Kendrapada, Jagatsinghpur, and Puri from on Sunday. The downpour will continue at one or two places in Balasore, Bhadrak, Jajpur, Kendrapada, Jagatsinghpur, and Cuttack on Monday.

According to SOA’s Centre for Environment and Climate (CEC), the system is likely to move northwestwards and likely to intensify into a Deep Depression on October 23 morning and it may change its direction of movement north- northeastwards at night. Thereafter, it may intensify into a cyclonic storm on October 24 morning and its movement in the north-northeastwards will continue till landfall along the Bangladesh coast late on October 24 or early next morning.

“Based on Saturday’s model products, the cyclone will move parallel to the Odisha coast with a distance of more than 150 km from the coast, so the wind speed may not be very high and vary from 60 to 80 kmph over Odisha coast,” CEC director S C Sahu said.

Extended School Holidays In Odisha & Other States This Diwali

Depression Over Bay Turns Into Deep Depression, Cyclone ‘Sitrang’ In Next 12 Hours