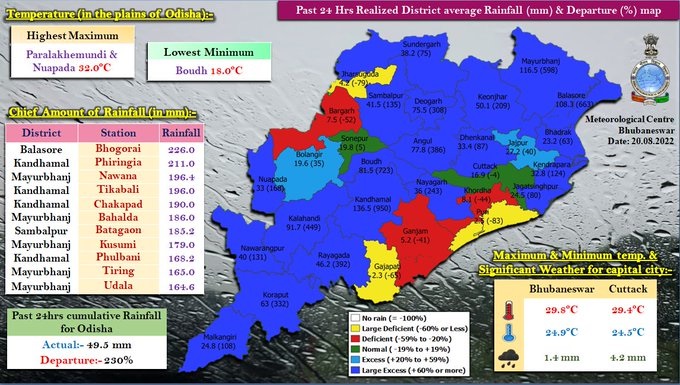 “The deep depression over south Jharkhand and adjoining north Odisha and West Bengal moved west-northwestwards during the past six hours at a speed of 15 kmph and lay centered at 8:30 am Saturday over south Jharkhand and adjoining north Odisha near latitude 22.7°N and longitude 85.6°E, about 60 km west-southwest of Jamshedpur (Jharkhand), about 70 km south-southeast of Ranchi (Jharkhand) and 170 km east-northeast of Jharsuguda (Odisha),” the Met department said.

It will continue to move west-northwestwards across Jharkhand and north Chhattisgarh towards north Madhya Pradesh during the next 24 hours and weaken gradually.

Squally winds of 40-50 kmph gusting to 60 kmph likely over northwest Bay of Bengal and along and off north Odisha coasts during the next 12 hours, which will decrease gradually thereafter. Strong winds reaching 30-40 kmph gusting to 50 kmph likely to prevail over interior districts (Sundargarh, Keonjhar and Mayurbhanj) of north Odisha during the next 12 hours.

Fishermen are advised not to venture into the sea along and off Odisha coast and northwest Bay of Bengal till August 20.