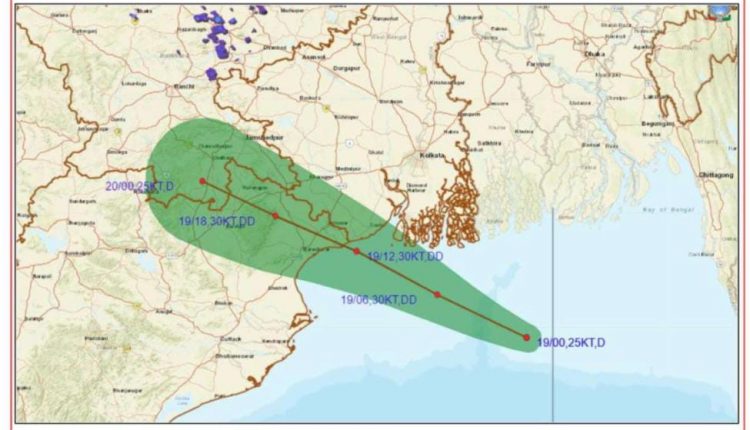 Bhubaneswar: The fresh low-pressure area over the Bay of Bengal concentrated into a depression on Friday morning and is to intensify into a deep depression in the next six hours, the India Meteorological Department (IMD)’s regional centre said.

The system is likely to move west-northwestwards and intensify into a deep depression during the next six hours and cross West Bengal and Odisha coasts between Balasore and Sagar Islands by Friday evening. “After landfall, it would continue to move west-northwestwards across north Odisha, West Bengal and Jharkhand towards north Chhattisgarh and weaken gradually,” it said.

Squally winds reaching 45-55 kmph gusting to 65 kmph is also likely over north Bay of Bengal and along and off West Bengal, Odisha and Bangladesh coasts during next six hours. It is likely to increase becoming 55-65 kmph gusting to 75 kmph from noon till midnight over the same region. It would improve gradually becoming squally wind speed reaching 40-50 kmph gusting to 65 kmph over northwest Bay of Bengal along and off West Bengal and Odisha coasts from August 20 morning for subsequent 24 hours, the IMD added.

The US’ Joint Typhoon Warning Center (JTWC) has warned that the system has the potential to intensify into a cyclone.
“Numerical model guidance indicates that the system will track west-northwestward towards Kolkata and make landfall within the next 36-48 hours. It is expected to peak in intensity within the next 24-36 hours just before making landfall. The system is expected to track into an area of lower vertical wind shear allowing the system to further intensify. Maximum sustained surface winds are estimated at 28 to 33 knots. The potential for the development of a significant tropical cyclone within the next 24 hours is high,” the JTWC said.

Under the influence of the system, heavy to very heavy rain is likely to lash several districts of Odisha. The IMD has also issued a red warning for four districts.

Check the forecast for August 19-20

Aug 20 (till 8.30 am)
Red warning: Heavy to very heavy rainfall (7 to 20 cm) at a few places with isolated extremely heavy falls (>20cm) is very likely to occur over Keonjhar, Bhadrak, Balasore and Mayurbhanj districts.

Aug 20 (8.30 am) to Aug 21 (8.30 am)
Orange warning: Heavy to very heavy rainfall (7 to 20 cm) is very likely to occur at one or two places over Jharsuguda, Sundargarh, Keonjhar, Deogarh, Sambalpur, Bargarh, Sonepur and Balangir districts.