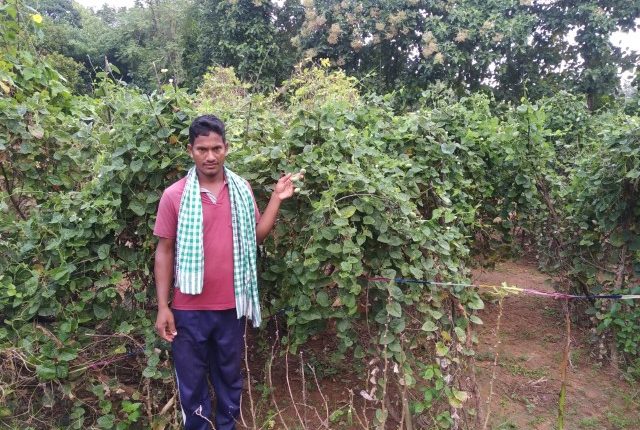 Deogarh: Narendra Kumar Sahu of Kanjiamba village under Reamal block in  Deogarh district in Odisha is hopeful of reaping rich harvest this year.

The 30-year-old has been doing farming since last 14 years. After Class X, he started helping his father in the agriculture field. Three years ago, the responsibility fell entirely on Narendra’s shoulders after his father took ill.

Now, he is the sole breadwinner of the family comprising  father, mother, wife and two daughters.

“I have two acres of land. I grow paddy in an acre and vegetables in the remaining land,” said Narendra.

“I depended on medicine stores to control pest and insects’ attacks. But they came back to haunt me,” said Narendra.

“I read ‘Krishi Bartta’ (Agriculture-related message) given by the Reliance Foundation from an Odia daily about four months back. I got many information on how to control pest attack. I also read the Odia daily to get more information on farming,” he added.

“I am really thankful to the Reliance Foundation, as it is giving right information in right time,” he added.

Know The Speed Limit In Twin Cities; Avoid Being Penalised