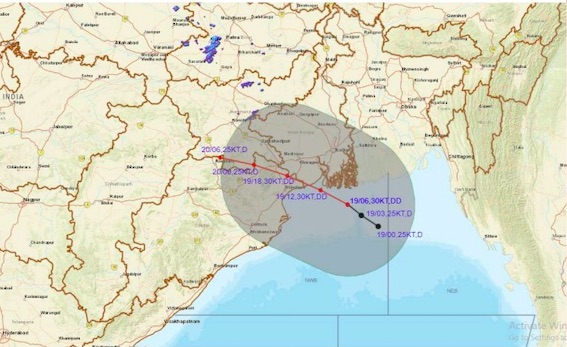 Bhubaneswar: The depression over the Bay of Bengal has concentrated into a deep depression, the Bhubaneswar Meteorological Centre tweeted on Friday afternoon.

“The depression over Northwest and adjoining Northeast Bay of Bengal moved northwestwards during past 6 hours with a speed of 20 kmph, intensified in a deep depression,” it said.

Continuing to move in the same direction, the system is likely to cross West Bengal and Odisha coasts between Balasore and Sagar Islands by evening. After landfall, it would continue to move west-northwestwards across north Odisha, West Bengal and Jharkhand towards north Chhattisgarh and weaken gradually, it added.

Also Read: Know What IMD DG Has To Say About Cyclone Speculation For Odisha

Under its influence, squally surface wind reaching up to 55-65kmph is expected in coastal areas, and 30-40kmph in interior districts. The strong winds are likely to damage thatched huts/unsecured or loose structures, paddy crops, banana and papaya trees and orchards.

Since sea condition is likely to be rough to very rough over North Bay of Bengal and along and off Odisha coasts, fishermen have been advised against venturing the sea till August 20.

Notably, the IMD has issued red warning for heavy to very heavy rainfall with isolated extremely heavy falls for Keonjhar, Bhadrak, Balasore and Mayurbhanj districts till 8.30 am on August 20. Heavy to very heavy rainfall (7 to 20 cm) is also likely to occur at a few places over Kendrapada, Jagatsinghpur, Cuttack, Dhenkanal, Angul, Deogarh, Sundargarh, Sambalpur, Sonepur, Boudh, Balangir and Jajpur districts during this period while Jharsuguda, Bargarh, Kalahandi, Kandhamal, Ganjam, Nayagarh, Khurda and Puri districts are likely to experience heavy rainfall (7 to 11 cm).