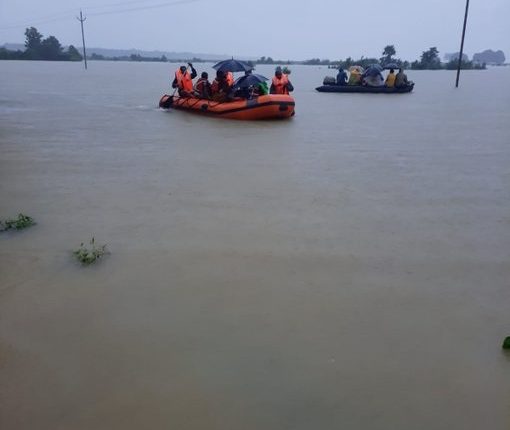 Puri: A flooded Dhanua river has inundated more than 20 panchayats in Nimapada and Gop blocks of Puri district, affecting thousands of villagers and damaging houses and crops.

An embankment on the Bhargavi river collapsed in Nimapada on Thursday night, spreading panic among villagers. According to reports, villagers have temporarily repaired it with sand and plaster but fear it might breach again unless the water recedes quickly.

School & Mass Education Minister Samir Ranjan Dash, who is the Nimapada MLA, visited the flood-affected areas and discussed relief and rehabilitation measures. The minister directed the Block Development Officer (BDO) and tehsildar to provide all help to the affected people immediately.

Several roads have been submerged in Astarang, Nimapada and Gop blocks of the district by floodwaters from Devi, Dhanua and Kushabhadra rivers.

A BJP team led by state party president Samir Mohanty on Thursday visited the flood-affected areas of Gada Balabhadrapur, Badasa, Dokanda and Sanaput panchayats of Kanasa block of the district.

Revenue and Disaster Management Minister Pramila Mallik met the BVO of Kanasa block on Friday and took stock of the distribution of cattle feed and healthcare measures for livestock in the flood-affected areas.

The tehsildar of Nimapada along with officials concerned visited the flood-affected areas of Toriabandh village under Sainsa Sasan panchayat and distributed polythene sheets on Friday.

Odisha Chief Minister Naveen Patnaik, who on Thursday conducted an aerial survey of the flood-affected areas, announced relief assistance for 15 days for the affected people of Khurda, Puri, Cuttack, Kendrapada and Jagatsinghpur districts.

The CM ordered district administration officials to assess the damage to houses and crops within seven days once floodwaters recede and provide compensation for the damage in the next 15 days.

The floods have affected 12 districts, affecting more than 4.67 lakh people in 1,757 villages, as per preliminary assessment of the government. The districts are Angul, Bargarh, Boudh, Cuttack, Jagatsinghpur, Jajpur, Kendrapada, Khurda, Nayagarh, Puri, Sambalpur and Subarnapur.

In view of the current situation with flood water disrupting lives all around, @Puri_Official has promptly begun the distribution of cooked & dry food in the affected areas of Pipili Block. pic.twitter.com/9dh7RdakSr

On 19.8.22, Tehsildar, Nimapada along with concerned officials visited the flood-affected areas of Toriabandh village of Sainsa Sasan GP and distributed polythene sheets. pic.twitter.com/zQeQAteWXa

Apart from food & polythene sheet distribution in flood-affected areas, @Puri_Official has mobilised medical teams to take all necessary measures to provide healthcare to the marooned citizens of Puri.

Medical Officers in charge have also been deployed to the field. pic.twitter.com/CEk6BUuEfn

Over One Lakh Villages In India Declared ODF Plus: Odisha Among Top 5 States