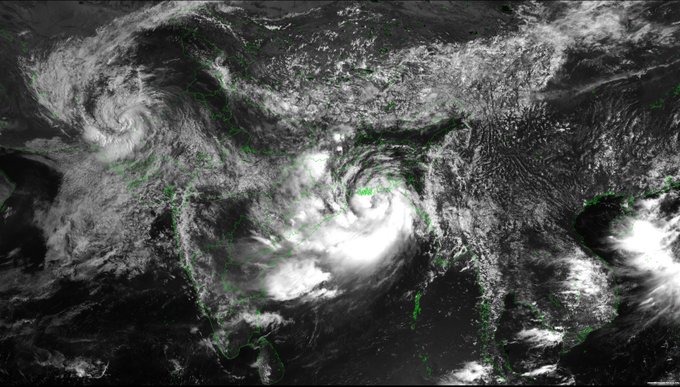 “It is very likely to move west-northwestwards and intensify into a deep depression during next 6 hours. Continuing to move in the same direction, it is likely to cross West Bengal and Odisha coasts between Balasore and Sagar Islands this evening. After landfall, it would continue to move west-northwestwards across north Odisha, West Bengal and Jharkhand towards north Chhattisgarh and weaken gradually,” the MeT office said in a special bulletin.

Squally winds reaching 45-55 kmph gusting to 65 kmph is also likely over north Bay of Bengal and along and off West Bengal, Odisha and Bangladesh coasts during the next 3 hours. It is likely to increase becoming 55-65 kmph gusting to 75 kmph from noon till midnight over the same region. It would improve gradually becoming squally wind speed reaching 40-50 kmph gusting to 65 kmph over northwest Bay of Bengal along and off West Bengal and Odisha coasts from August 20 morning for subsequent 24 hours, the IMD added.

Sea condition is also likely to be rough to very rough over the North Bay of Bengal and along and off Odisha coasts on August 19 and gradually improve becoming rough over the same region from August 20. Local cautionary signal No.3 (LC-3) has been hoisted at all ports of Odisha.

Red warning for heavy to very heavy rainfall with isolated extremely heavy falls has been issued for Keonjhar, Bhadrak, Balasore and Mayurbhanj districts till 8.30 am on August 20. Heavy to very heavy rainfall (7 to 20 cm) is also likely to occur at a few places over Kendrapada, Jagatsinghpur, Cuttack, Dhenkanal, Angul, Deogarh, Sundargarh, Sambalpur, Sonepur, Boudh, Balangir and Jajpur districts during this period while Jharsuguda, Bargarh, Kalahandi, Kandhamal, Ganjam, Nayagarh, Khurda and Puri districts are likely to experience heavy rainfall (7 to 11 cm).

Orange warning continues for the subsequent 24 hours with a forecast for heavy to very heavy rainfall (7 to 20 cm) at one or two places in Jharsuguda, Sundargarh, Keonjhar, Deogarh, Sambalpur, Bargarh, Sonepur and Balangir districts. Heavy rainfall (7 to 11 cm) is very likely to occur at isolated places over Mayurbhanj, Angul, Boudh, Kalahandi, Nuapada, Nabarangpur and Dhenkanal districts.