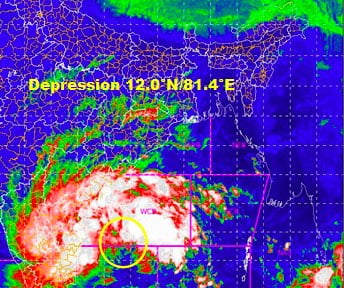 Bhubaneswar: The depression over southwest Bay of Bengal is about 170 km east-southeast of Chennai and 170 km east of Puducherry. It will continue to move west-northwestwards and cross north Tamil Nadu and adjoining south Andhra Pradesh coasts around Chennai by evening, the India Meteorological Department (IMD) said on Thursday.

The well-marked low-pressure area had intensified into depression at noon on Wednesday.

The Met office has forecast light to moderate rain /thundershower in some parts of district Gajapati, Cuttack (including Cuttack city), Khurda (including Bhubaneswar city), and Jagatsinghpur within the next 3 hours.

Cloudy overcast skies are likely in the South interior and coastal Odisha. Southern districts of the state may experience light to moderate rain. The night temperature is likely to rise by two to three degrees, it added.

Odisha is likely to experience light to moderate rain till November 14.

Meanwhile, red alert has been issued for eight districts — Chennai, Tiruvallur, Ranipet, Vellore, Salem, Kallakurichi, Tirupattur and Tiruvannamalai — as extremely heavy rainfall measuring above 20.4 cm is expected at one or two places and very heavy to heavy rainfall at a few places.