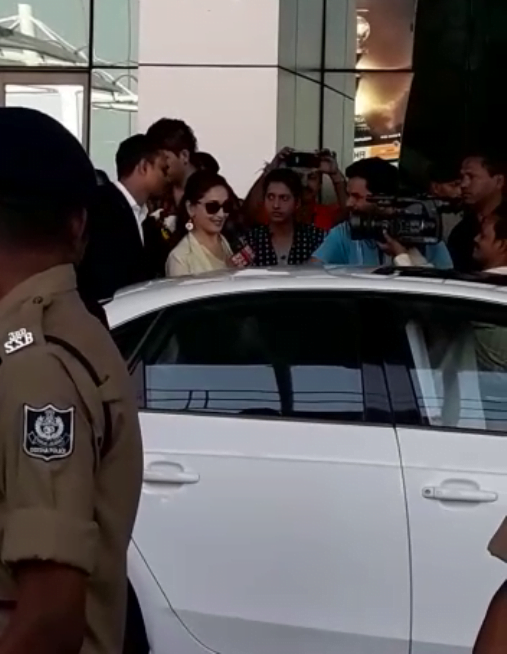 She was welcomed by a huge crowd at the airport.

Madhuri will make a night halt at Hotel Mayfair on November 27 as she will be participating in the cultural function at the stadium in the night.

She will be performing along with 1,000 artists.

Her enthralling theatrical dance drama is titled ‘the Earth Song’, the theme of which is ‘Oneness of Humanity’. Created, written and directed by Nupur Mahajan, the dance drama will have Madhuri in the titular role of Mother Earth.

The 40-minute performance will unfold five acts, choreographed by Shiamak Davar with music by Ranjit Barot.

On the other hand, music director and singer A R Rahman is already in the city and will be performing at the inaugural ceremony along with actor Shah Rukh Khan.

King Khan will arrive in Bhubaneswar on Tuesday and leave for Mumbai immediately that night.

The security for the superstar was beefed up after an outfit Kalinga Sena threatened to throw ink on his face and welcome him with black flags. However, the outfit withdrew its threat later on the appeal of Hockey India president Mohammed Mushtaque Ahmad.

Odia actors Sabyasachi Mishra and Archita Sahu will also be performing on the inaugural evening.

The stage is set for the grand affair on Tuesday following which the games will begin on November 28. The mega event will conclude on December 16.

Simultaneously, Bhubaneswar City Fest will also go on that will include several musical and dance performances. International Food Festival will also be a part of this fest, starting December 1.