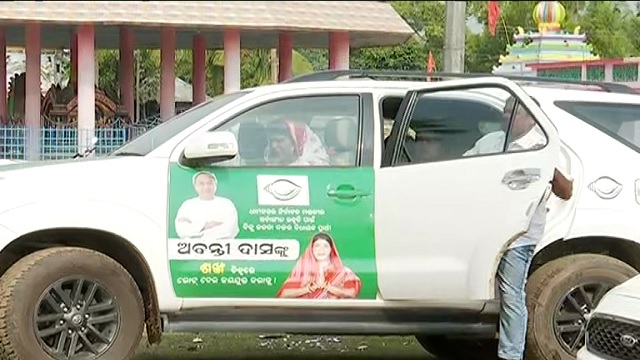 Bhadrak: Amid the voting for bypoll to Dhamnagar Assembly Constituency in Odisha’s Bhadrak, tension flared up after a vehicle with posters of Biju Janata Dal (BJD) and party candidate Abanti Das was found parked within the prohibited zone of a polling station on Thursday.

According to sources, Das visited booths 75, where polling process was disrupted due to technical problems with the electronic voting machine (EVM), and 77 at Kanpada this morning but the vehicle she arrived in had a poster of BJD. Amid protests from voters, the car, which was parked within 100 meters of the booth, soon raced away.

Das, however, said that there was no violation of the poll code of conduct. “Such allegations will have no impact on the election results. We will win by a large margin,” she said.

Notably, candidates are barred from engaging in any kind of campaigning within 100 metres of polling booths. Referring to an earlier incident, Ranjan Mohanty of Election Watch earlier told Odisha Bytes that elections officers were once asked to cover party symbols at a polling booth following a complaint by Congress leader Rahul Gandhi.

Meanwhile, 22.36 % of eligible voters had cast their votes in the by-election by 11 am, the office of Chief Electoral Officer (CEO) informed.

Why Is Virat Kohli Accused Of Cheating In India-Bangladesh Cricket Match?

Winter Session Of Odisha Assembly From Nov 24; Check The Schedule