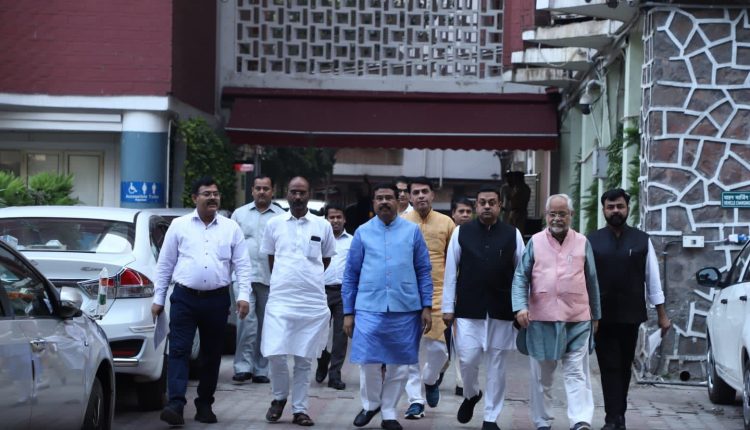 Bhubaneswar/New Delhi: A BJP delegation led by Union Education Minister Dharmendra Pradhan on Wednesday moved the Election Commission of India (ECI) accusing the ruling BJD of distributing money to voters and violating poll code ahead of Dhamnagar by-election in Odisha.

Dharmendra and BJP national spokesperson Sambit Patra met the ECI in Delhi and submitted a memorandum seeking action against those involved in the money distribution and stop BJD from indulging in violation of the poll code.

The BJP leaders apprised the ECI about alleged ‘inaction’ of the Chief Electoral Officer (CEO) of Odisha despite complaints lodged by the party regarding alleged poll code violation by the BJD.

“State Government machinery is being misused in Dhamnagar to lure voters. We apprised the ECI about the inaction of the Odisha CEO on our complaints about poll code violation by the ruling BJD. By not taking action even after submission of evidence, he (CEO) is literally giving permission to officials to carry out wrongdoings,” the senior BJP leader said.

Alleging that the CEO is protecting the culprits in the name of forensic evidence, Dharmendra claimed that two videos have gone viral on social media where voters of Dhamnagar are being bribed with cash.

Basing on the video, the BJP has apprised the local election officer as well as Chief Electoral Officer and demanded strict action against those involved in such activities, but no actions have been taken so far, he said.

In one video, a BJD  worker was seen announcing at a parry meeting that Chief Minister Naveen Patnaik would give Rs 1 crore each to every panchayat that votes for his party. The party worker had made the statement in the presence of Minister Pritiranjan Ghadei, Rajya Sabha MP Sulata Deo and Vice President of Zilla Parishad Tunibala Biswal, they said.