Dharavi Model Recieves A Special Mention By WHO For Successful Interventions 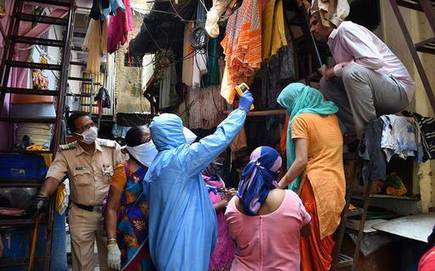 Mumbai: The successful intervention of the COVID-19 virus in Dharavi drew a special mention from World Health Organization (WHO) among other countries, on Friday.

Despite being a densely packed area in Mumbai, Dharavi has been consistently reporting a slowed growth rate of  COVID-19 cases.

WHO Chief Tedros Adhanom Ghebreyesus told a virtual press conference in Geneva, quoted by India Today, “…..Italy Spain and South Korea, and even in Dharavi — a densely packed area in the megacity of Mumbai — a strong focus on community engagement and the basics of testing, tracing, isolating and treating all those that are sick is key to breaking the chains of transmission and suppressing the virus.”

There is a possibility of containing the outbreaks even though the number of cases has spiked in the last few weeks, said Tedros.

Dharavi, which reported just one case a few days ago, has reported 12 new cases on Friday taking its total number of active cases to 166. Witnessing a steady rise in the recoveries, such cases stand at 1,952, reported Mumbai Mirror.

According to the report, earlier, Centre had also praised the Mumbai civic body, Brihanmumbai Municipal Corporation (BMC), for “actively” chasing the novel coronavirus in Dharavi. The report said that proactive measures reduced the growth rate of the infection in Asia’s largest slum to 1.02 per cent in June from 12 per cent in April.

The Union Health Ministry had earlier lauded the BMC for ensuring a steep decline of daily COVID-19 cases in Dharavi from an average of 43 in May to 19 in the third week of June.

Almost Half Of New Corona Cases In Bhubaneswar In Their 20s, Infection Spreads In Families