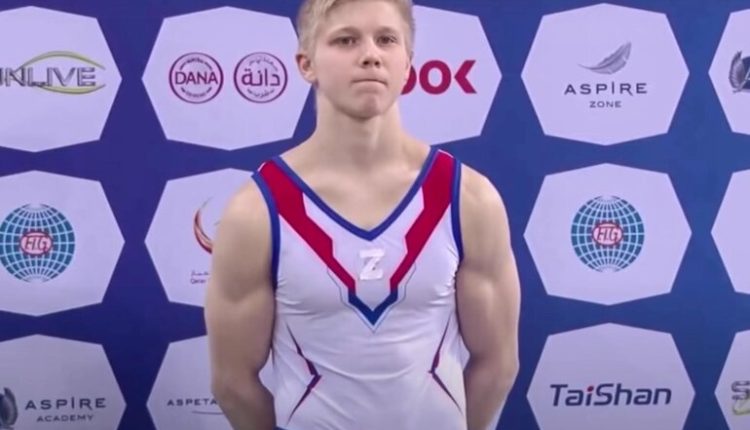 New Delhi: Russian artistic gymnast Ivan Kuliak has invited the ire of the International Gymnastics Federation (FIG), which says it will open disciplinary proceedings against him for displaying a symbol of support for Russia’s invasion of Ukraine during an event in Doha.

At the Gymnastics World Cup event in Doha, Kuliak sported a ‘Z’ on his shirt while standing next to Ukrainian gold medallist Illia Kovtun. Kuliak, 20, had “Z” prominently visible – a move that has not gone down well with fellow competitors and the sporting body, firstpost.com reported.

“The International Gymnastics Federation confirms that it will ask the Gymnastics Ethics Foundation to open disciplinary proceedings against … Kuliak following his shocking behaviour at the Apparatus World Cup,” the FIG said in a statement on Sunday.

Notably, the FIG has cancelled all of its events in Russia and Belarus while clarifying no new events will be staged there until further notice. Russian and Belarusian gymnasts are barred from competitions.

What does ‘Z’ represent?

Since the Ukraine war began 13 days ago, Russian military vehicles are roaming around near Kyiv and other Ukrainian cities sporting a “Z” marking painted on their sides. The white emblem is stylised in a thick brushstroke. Many protesters, particularly those supporting Russia, have been found wearing them on t-shirts too.

Social media is full of interpretations of the symbol.

According to Galina Starovoitova Fellow Kamil Galeev, “Z” is a letter that Russian Military are putting on their vehicles departing to Ukraine. “Some interpret “Z” as “Za pobedy” (for victory). Others – as “Zapad” (West),” the scholar said on Twitter.

“This symbol invented just a few days ago became a symbol of new Russian ideology and national identity,” he added.

The symbol has found many supporters. Many Russian civilians and business owners are putting “Z” on their cars without being forced. Others say these markings act as signals to fellow Russians to identify their own vehicles in the warzone and avoid friendly fire, NDTV reported.

“Z” is a letter that Russian Military are putting on their vehicles departing to Ukraine. Some interpret “Z” as “Za pobedy” (for victory). Others – as “Zapad” (West). Anyway, this symbol invented just a few days ago became a symbol of new Russian ideology and national identity pic.twitter.com/iWuBPhhdEb

Just another day in the life of Maria Butina:

Drawing a white “Z” marking on your lapel to show solidarity with the invasion of Ukraine pic.twitter.com/raYG3kRznT

US, West Scramble To Arm Ukraine