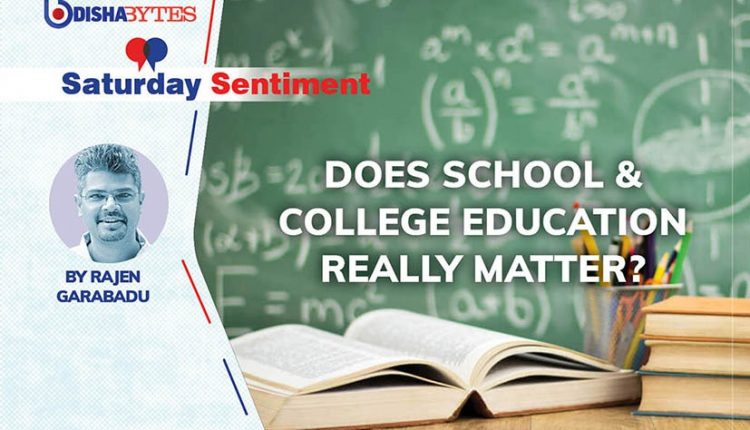 How much did your school and college education impact and influence you?

How useful has your learning in school and college been later in your life?

Not really. That’s the short answer in my case.

When I hear others crediting their alma mater for how they have turned out, it feels good to know. I‘d be happy to acknowledge the educational institutions I attended, and what I learned during that period – if only, it happened that way.

How do I say it if it doesn’t feel true?

It’s not that I did not go to the right school and college. The educational institutions I attended were historic. But they remain just that – a part of my history. They had little bearing later in life.

Am I saying that there is no remarkable takeaway in the 16 years of student life which I can credit to my learning during school and college?

Wait! Don’t judge me yet.

There was nothing wrong with my school, college, or its teachers. My school was among the best in my hometown. My college was perhaps the best in the state. A sizeable number of the most accomplished citizens of the state (and some went on to leave a mark at the national level) have graduated from the same college. Students from other states flocked to study there.

But here are three indisputable facts that hold for me:

I am aware my above statements may not be appreciated. Some of my peers may disagree. I know this is not a good thing to say. But what the heck, it’s true!

The blame does not lie with my school and college. The problem rests with the curriculum – which mostly focuses on subjects that have little or no consequence in later life. They did not teach me what I learned later from trying, failing, and succeeding. Life taught me that. But it could so easily have been a part of my learning as a student.

When you invest a decade and a half fully into something, it ought to generate commensurate returns. I sometimes wonder why I spent so much time and energy on something which had so little consequence. If I had invested that much time in a subject or field I was passionate about, perhaps I may have found success earlier.

Readers may or may not agree with the following statements I am about to make. But they are true, from my own experience.

The impact of our school and college education is grossly overestimated. The importance given to it is flawed.  Why spend so many years of your formative life trying to understand things which have little or no impact on your post-student life?

Instead, I should have been taught how to:

Looking at the big picture, it is the whole education system that is flawed. Schools and colleges are just by-products of the system. They follow the curriculum set and impart education accordingly.

Modern schools now offer new means of teaching to children – different from how conventional schools impart education. But if the syllabus, by and large, remains the same, tinkering with how you teach may be more engaging and memorable for students but it still won’t solve the problem.

Till we fix what is being taught, and how relevant it will be in the student’s future, I don’t see much changing in the years to come.

But till then, what’s the option?

Unschooling is one of them. The fundamental premise behind unschooling is the choice lies with the child – what to study, when to study, and how much to study. It’s an opportunity for the child to explore her interests, and find her passion rather than conform to the curriculum set by the state or the rigid structure of formal education.

Here, the child is the decision-maker of her future. Unschooling spurs natural creativity.

After all, learning is a natural process. Isn’t it?

No one teaches a child to crawl, sit or walk. The child picks up these abilities on its own. Why not allow the child to figure out subjects that interest her that she can explore as she deems fit?

It will help the child arrive at her calling much ahead of her peers enrolled in traditional schools. The sooner she knows what she enjoys doing, the quicker she will excel in it. Time is priceless. Why should such an important and far-reaching decision be left to your teens and twenties which you can naturally arrive at much earlier?

There’s more to gain. When you trust your child, she feels responsible. She knows her decisions are her own which she must take seriously. The sense of ownership is much more when she understands the onus lies with her. If it works out, the credit is entirely hers, If not, she must bear the consequence of her own decision.

You’ve all heard or said, ‘let nature take its course’. Why not follow it for your child’s education?

(The writer is Chief Executive Producer, News18 Network. This piece was first posted on LinkedIn and has been reproduced here with his consent)