Dressed As Gandhi, He Spreads Swachh Bharat Message On Foot 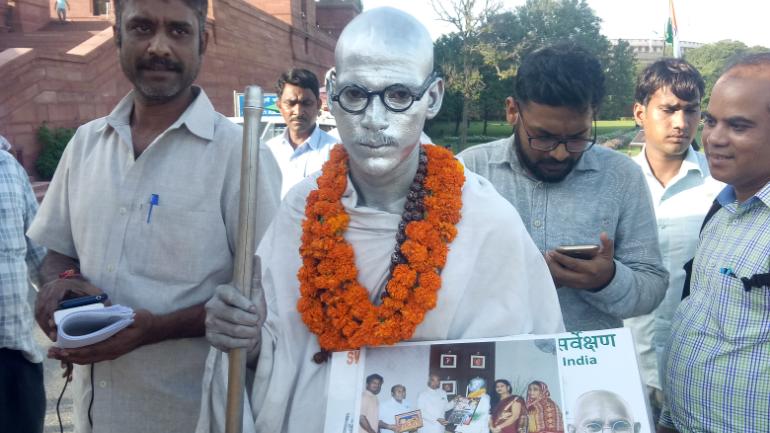 He was felicitated for the ‘Longest Journey by Road as Mahatma Gandhi’ by Union Minister Rajyavardhan Singh Rathore in Jaipur, Rajasthan, on Monday.

With silver paint on his face and in Gandhi attire, Mohan has walked 2000 km in the last two years.

A student of theatre in Odisha, he set out on a padayatra from Jagannath Temple in Puri on June 26, 2016. He has dedicated his life to cleanliness and peace, and wishes to take up a job in Swachh Bharat Abhiyan.

Mohan, who played the role of Gandhi in his school days, is welcomed by selfies and smiles wherever he goes. He has already met President Ram Nath Kovind and received acknowledgements from other Union Ministers, but he wishes to meet Prime Minister Narendra Modi and tell him about his dedication to the mission.

Mohan’s father passed away three months back and he is currently jobless.

Odisha Assembly Adjourned Till 11.30 AM Amid BJP, BJD Uproar