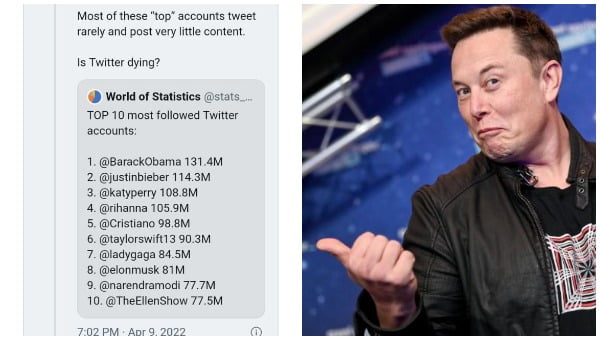 New Delhi: The newest board member and largest stakeholder of Twitter, Elon Musk, fired another salvo at the microblogging platform by calling out the 10 most-followed personalities, including Prime Minister Narendra Modi, who tweet ‘rarely and post very little content’’.

The CEO of Tesla and SpaceX CEO then poignantly asked, ‘Is Twitter dying?’

“For example, @taylorswift13 hasn’t posted anything in 3 months,” Musk continued. “And @justinbieber only posted once this entire year.”

However, tweets are being posted almost daily on @narendramodi.

The employees of the social media company had earlier expressed concerns about Musk’s influence since he wasted no time in trying to shake it up by calling for an edit function and criticising cryptocurrency bots as the “most annoying” problem after being named to the board on Tuesday.

Workers cited worries about Musk’s statements on transgender issues and his reputation as a difficult and driven leader, according to Washington Post report.

On Thursday, Musk tweeted a photo of himself smoking marijuana on a Joe Rogan podcast in 2018, with the caption, “Twitter’s next board meeting is gonna be lit.”

Bhubaneswar: From A Planned City To Planned Destruction?