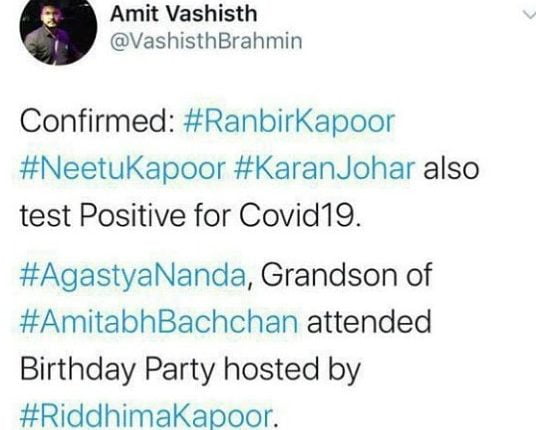 Mumbai: Right after the news of superstar Amitabh Bachchan testing positive for coronavirus came out on Saturday night, a tweet claiming actor Ranbir Kapoor and mother Neetu Kapoor had also tested positive after coming in contact with Agatsya Nanda, Amitabh Bachchan’s (AB) grandson. Agatsya had visited their place for a birthday party, said the tweet.

However, Ranbir’s sister Riddhima Kapoor Sahni has lashed out at the tweet calling it a rumour and labelled it “Attention seeking ???” “Least verify/ clarify ! We are fit We are good ! Stop spreading rumours ! #lunatics,” she wrote in her Instagram post.

Some fans supported her on the issue suggesting her to take legal action against such rumour mongers.

Amitabh Bachchan on Saturday tweeted the news about his COVID-9 positive result and urged everyone who came in contact with him in the last 10 days to get tested. Son Abhishek Bachchan too tweeted that he has also been admitted to Nanavati hospital and revealed that he and his father both had “mild symptoms.” Later it was known that Jaya Bachchan, Aishwarya Rai & daughter Aaradhya have tested negative for the virus infection.