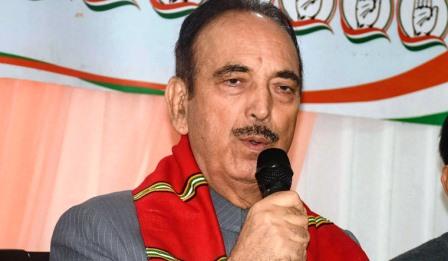 Srinagar: Never say never in politics. Anything can happen, especially in Indian politics.

Former senior Congress leader Ghulam Nabi Azad, who had resigned from the party four months ago, is now said to be planning a return to the grand old party.

Talks between Azad and Congress party have already been initiated, reported ANI.

Azad, who had even announced the name of his new party – Democratic Azad Party – in late September, seems to be disillusioned man.

He had said during the Gujarat and Himachal Pradesh assembly elections in November-December that Congress is the only party which can compete with the BJP.

The 73-year-old Azad, who blasted Rahul Gandhi for his “immaturity” and for “demolishing the consultative mechanism” in Congress in his resignation letter, recently remarked he is not against the Congress policy but had issues with its weak system.

Digvijaya Singh reportedly invited Azad to join Rahul’s Bharat Jodo Yatra. Some senior Congress leaders have also advised Azad to return to the party while Ambika Soni has been assigned responsibility to bridge the gap between Azad and Congress high command.

Azad is learnt to be seriously considering Congress’ overtures, but has not yet responded.