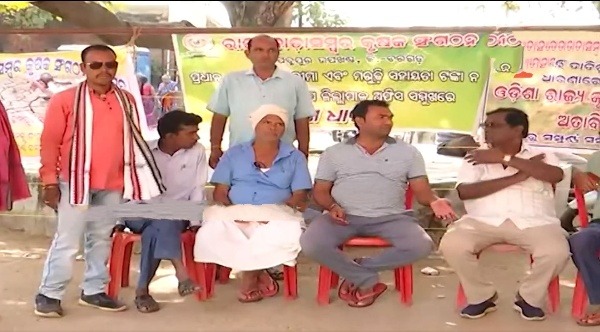 Bargarh: Despite the Odisha government and the Centre announcing measures to resolve issues related to crop insurance claims and input subsidy, the agitating farmers in bypoll bound Padampur assembly segment in Bargarh district have decided to continue their stir.

A large number of farmers, under the banner of ‘Rajaboda Krushak Sangathan’, are sitting on dharna in front of the sub-collector’s office at Padampur. The protesters said they do not have faith in the announcements as the community has earlier been “cheated several times”.

The agitation will continue till the farmers get crop insurance claims and drought input subsidy in their bank accounts, Sangathan president Banchhanidhi Nayak, conveyor Ashok Sahu and others told reporters at Padampur.

The farmers constitute about 82 per cent of the 2.59 lakh voters in the assembly constituency. Noting that the government announcements had no impact on the farmers, the Sangathan leaders said the cultivators will give a befitting reply to the political parties in the December 5 by-poll in Padampur.

“We have been staging the agitation seeking crop insurance claims for along time. Just before the bypoll, the Centre announces that the matter has been settled. We have no trust in announcements. Farmers will call off the stir only after getting the money in their bank accounts,” farmer leader Ramesh Mohapatra was quoted by PTI as saying.

“The announcements made by the Central and the state governments simply indicate that the politicians are only interested in votes and nothing else. The farmers had paralysed the functioning of the Padmapur sub-collector’s office for 20 days besides resorting to road and rail blockades. But the government did not listen and suddenly woke up before the elections,” he said.

Claiming that the farmers will be the deciding factor in the ensuing by-poll at Padampur, Mohapatra said the Sangathan is in no way linked to any political party and will not tell a farmer to vote for a particular camp.

The Sangathan, he said, wants that there should be no distribution of money, liquor or any kind of malpractice during the by-election. The farmers’ outfit had ensured that candidates of the political parties did not file nomination papers for the by-poll till the last date on November 17.

Even BJP candidate Pradip Purohit returned without filing nomination paper on November 14 when he reached the sub-collectors office to submit his papers. All the candidates including Purohit filed their nomination onl the last date.

The farmers have been demanding settlement of their crop insurance under the Pradhan Mantri Fasal Bima Yojana since Kharif, 2021 and input subsidy for last year’s drought.