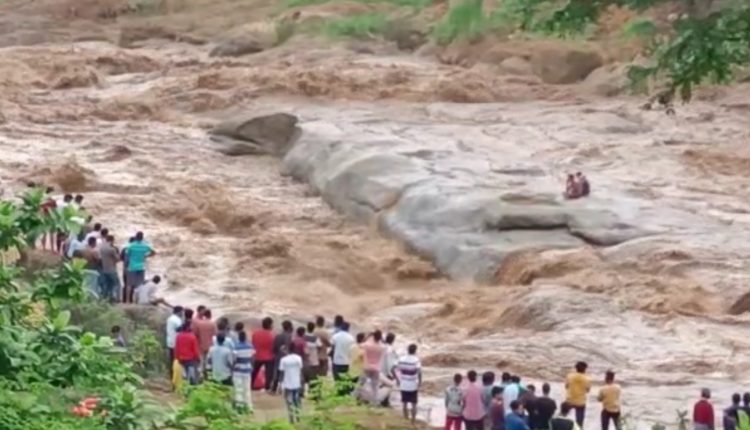 With the water level rising in Pilasalki river of Kandhamal district, several bridges in the low-lying areas were reportedly submerged. The river was flowing above the danger mark of 3 metre at Nadikhandi Sahi. The floodwater from the river has entered Dakapala, Damigaon, Nuaripadara and Aalami villages.

Due to the incessant rain, several mud houses and the newly constructed boundary wall of Narayani park in Phulbani collapsed on Saturday night. The boundary wall of a pond under Baliguda NAC has also caved in.

In Keonjhar district, Samakoi river was in a spate rendering Munda Sahi under Talapada panchayat of Telkoi block marooned. Fire service personnel had to rescue a pregnant woman from the waterlogged village. They admitted her in the hospital by crossing flooded Samakoi river. The district has been receiving incessant rain for the last few days.

Similarly, the water level of Nagavali river in Rayagada district has gone up, spilling over its banks, since last night. Two persons, who had gone to the river in Podapadi area under Kashipur block, were stranded on a huge stone in the middle of the river on Sunday.

The Fire personnel have rushed to the spot to rescue the stranded persons. The district has been receiving rainfall for the last couple of days.

Due to consumption of polluted flood water, diarrohea has been reported from several villages under the block. So far, around 70 people have been admitted to different hospitals for treatment of the water-born disease.

In coastal Odisha, parts of the Pilgrim Town of Puri faced water-logging on Sunday. The rainwater entered several houses in low-lying Baselisahi of the town. The residents were found draining out the polluted water from their houses with buckets.