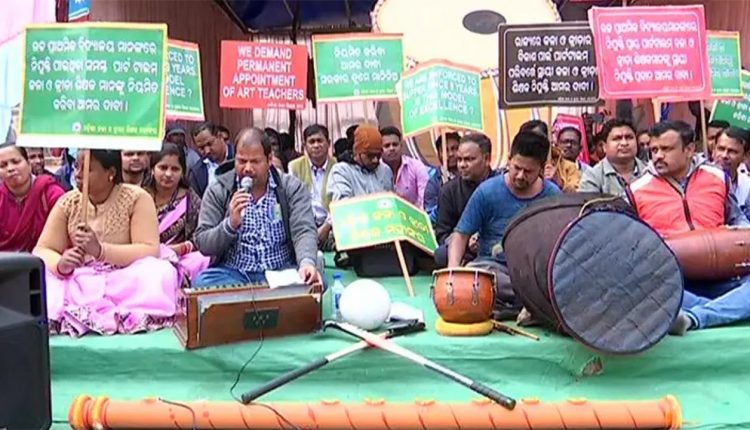 Bhubaneswar: The agitating Art and Physical Education Teachers received support from an unusual quarter at their protest site in Odisha capital when a group of foreign tourists listened to their grievances, expressed their solidarity and also joined the sit-in.

Around six tourists from Spain stopped at the lower PMG square in Bhubaneswar where a large number of Arts and Sports teachers from different parts of the state have been staging a dharna for the last 35 days and enquired about their problems.

“The tourists from Spain not only expressed their solidarity towards our demand for permanent employment and salary hike but also joined us at our dharna site. They interacted with us and also joined us in the sit-in for some time,” said an agitator.

The tourists, who identified themselves as teachers, underlined the need to address the grievances of the part-time Arts and Sports instructors for the interest of all, including students, he said.

Seeking regularisation of their contractual jobs, the teachers protested in a unique style raising slogans against the state government through music and drama.

Though the state government is spending huge money to beautify Bhubaneswar and Rourkela ahead of Hockey World Cup and to attract tourists, it has all along been indifferent towards contractual Art and Sports Teachers, said another protester.

The government is using art to promote sporting event, but neglecting the teachers, he said.

Hundreds of contractual art teachers and PETs from upper primary schools across Odisha have been staging sit-in since December 5.

“It is unfortunate that we continue to remain as contractual teachers for more than 9 years. We demand regularisation of our jobs,” he added.

Though the Odisha government had abolished the contractual recruitment system in October last year, many contractual employees have been left out and continue to protest demanding regularisation of their jobs.