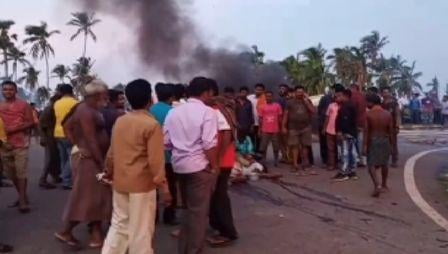 Puri: Police on Monday detained four persons in connection with the murder of three members of a family on the National Highway at  Pattnaikia on Sunday afternoon.

Puri Sadar SDPO Kishore Chandra Mund said, “The CCTV footage at the Pattnaika check post is being examined to identify the three assailants. They will be arrested very soon.”

The SDPO said that the incident could be the fallout of a land dispute.

The post-mortem of the deceased will be conducted at the district headquarters hospital on Monday.

Notably, three members of an extended family were chased by a group of miscreants and then murdered on the National Highway around 5 pm on Sunday. The deceased were identified as Krushna Behera, Panchu Behera and Purna Behera.

Following the killings, irate locals blocked the National Highway for about four hours till 9 pm. Later, they withdrew the blockade after police rushed to the spot and assured them of arresting the accused very soon.