From Bolt To Fraser-Pryce, The Fascinating Journey Of Olympic Super Sprinters 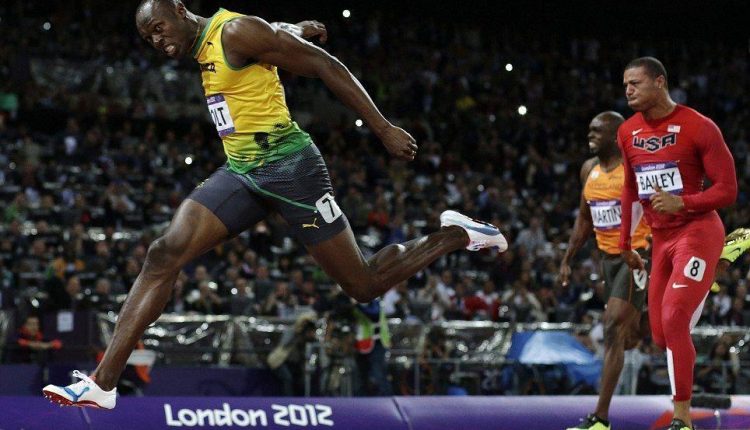 The Tokyo Olympics has already seen some stellar performances. From Friday, July 30, however, the focus will shift to the Olympic Stadium where track and field events get underway.

The sporting world will come to a standstill on July 31 and August 1, when the fastest woman and man of planet Earth will be decided.

No other event attracts so much attention as the 100m sprint in athletics. The world heavyweight boxing champion was earlier considered to be the ‘alpha male’ and supreme athlete. But over the years, that title has been taken over by the Olympic 100m champion.

As we begin the countdown to those magical moments over this weekend, let us look back at some fascinating stories on sprinting and its champions.

Not A Bolt From The Blue

We have to start with Usain Bolt, the only sprinter to win the 100-200m double at three straight Olympic Games. He added 2 more 4x100m relay wins as part of the Jamaican team to finish a glittering career with an enviable 8 Olympic gold medals. Add to it the fact that he is also an 11-time world champion, and you know the legend we are talking about.

In his early years, Bolt wanted to be a cricketer, but his father convinced him to take to sprinting. His coach wanted him to run 400m, which Bolt hated it. His coach then had a bet with Bolt that if he could run 100m in 10.03 seconds, then he could switch to sprint.

Bolt did that in his very first attempt. The rest, as they say, is history.

Having seen the curse of doping ruin champion sprinters like Ben Johnson, Bolt was very careful about medication. He avoided medicines as much as possible. If he had a cough or a cold, he would never have cough syrup as there was a chance of someone spiking it.

He also regularly got himself tested and made himself available for testing always. Once Carl Lewis, another sprint legend, accused Bolt of being doped, but the Jamaican ignored it as he did not know who Lewis was. Later, after realizing Lewis’ stature, Bolt lashed out against him.

King Carl And His Reign 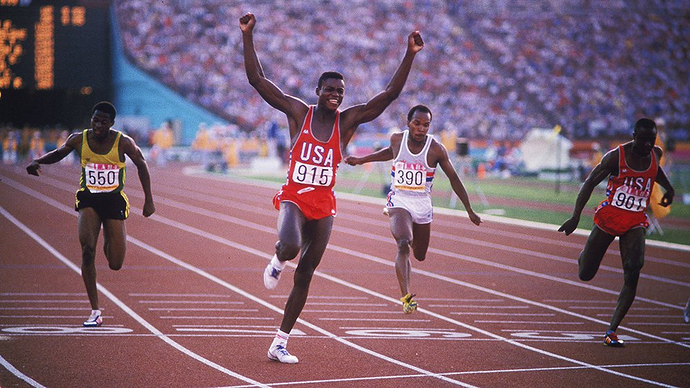 That brings us to Carl Lewis himself, one of only four Olympians to win gold in the same event in four consecutive Olympics. Lewis achieved that in long jump, while Al Oerter, Michael Phelps and Paul Bert Elvsstrom did it in discus throw, 200m individual medley swimming and monotype yachting, respectively.

In long jump, Lewis had an excellent first jump of 8.54 metres. He knew it would be enough to clinch the gold, so he fouled the second jump and passed the next four. This led to criticism from several quarters, but he knew what he was doing and had clarity of thought. He wanted to be injury-free for the 200m and 4x100m relay, and he won gold in both.

In 1987, his father passed away and ‘King Carl’ laid his 100m gold medal to rest with him, telling his mother, “Don’t worry, I will get another one.”

He did, but it was not without drama. Canadian Ben Johnson won the 100m with an astonishing performance and Lewis had to settle for silver. However, Lewis was elevated to gold position after Johnson was stripped of the golden metal for drug abuse.

Lewis went on to strike gold in long jump in the 1988 Seoul Olympics. In the 1992 Barcelona Games, the American won gold in 4x100m relay and long jump, while in Athens (1996) he topped in long jump. In 1999, the IAAF declared him Male Athlete of the Century. 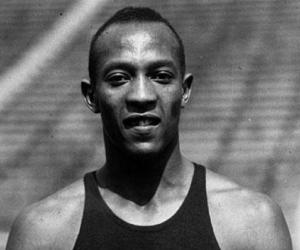 We now come to Jesse Owens. His grandfather was a slave and father a sharecropper before working as labourer in a steel mill. In his youth, Jesse did various menial jobs like delivering groceries, loading freight cars and working in a shoe repair shop.

A coach noticed his running talent and trained him before school, as Jesse used to work in a shoe-repair shop after classes. He then went to Ohio State University, where despite being an undisputed champion, he had to stay off campus, eat at blacks-only restaurant or take carry-aways. He did not qualify for a scholarship, and had to work to pay his university fees.

At the 1936 Olympics, Jesse won 4 gold medals – a feat which matched by Lewis 48 years later. In long jump, Jesse was given technical advice by his German competitor Luz Long, illustrating great sportsmanship.

Even after his Olympic exploits, Jesse didn’t live a happy life. At the age of 32, he became a chain smoker, continuing with his packet-a-day routine for 35 years. He was diagnosed with lung cancer, which eventually led to his death.

He worked as a gas station attendant, playground janitor and manager of a dry-cleaning firm. Jesse even had to race against horses. Asked why, he shrugged and said, “People say it was degrading for an Olympic champion to race against a horse, but what to do. I had four gold medals, but you can’t eat gold medals.” He turned it around in later years and became a powerful orator, earning around $100,000 a year.

Among his awards, the Presidential Medal of Freedom in 1976 and Living Legend award in 1979 were precious.

After he passed away, US President Jimmy Carter summed up Jesse aptly. “Perhaps no athlete better symbolized the human struggle against tyranny, poverty and racial bigotry,” Carter famously stated. 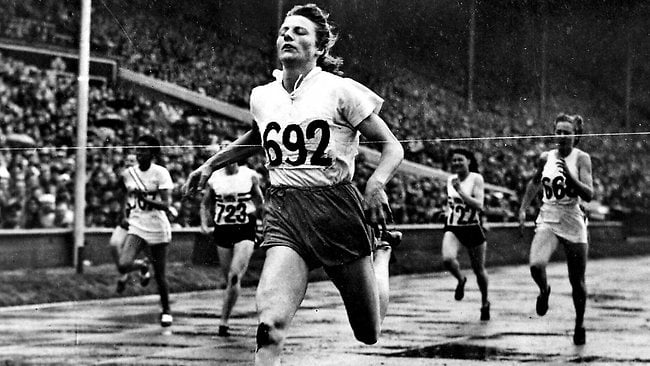 Shifting focus to great female sprinters, let us begin with Fanny Blankers-Koen – the Dutch athlete who won four gold medals at the 1948 Olympics in 100m, 200m, 4x100m relay and 80m hurdles at the age of 30 when she was a mother of two children. It was no surprise that she was nicknamed ‘Flying housewife’.

When she was 18, Fanny had qualified for the 1936 Olympics in high jump and 4x100m relay. A medal eluded her as she finished 5th in high jump and the Dutch team, too, was 5th in relay. But she obtained a prized possession at the 1936 Games — the autograph of Jesse Owens. She also met her future husband Jan Blankers, a former triple-jumper who participated in the 1928 Games before becoming a sports journalist. After their marriage, he became her coach. She missed 2 possible Olympic appearances due to World War II, but made up for lost time in the 1948 Games. IAAF declared her the Female Athlete of the Century.

Flo Jo And The Unique Double 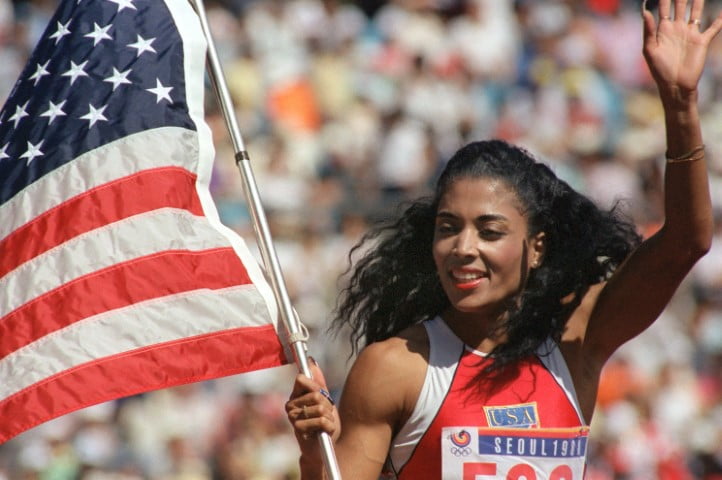 Next we come to Florence Griffith Joyner, popularly known as Flo Jo. The American won a silver in 200m at the 1984 Olympics, behind Valerie Brisco-Hooks, herself an inspirational athlete who won 3 gold medals and was the first lady to win 200m and 400m in the same Olympics.

Seoul 1988 turned out to be Flo Jo’s year. She won gold in 100m, while Evelyn Ashford had to settle for silver. Flo Jo completed a sprint double, rewriting world record in both 100 and 200m. Both records stand to this day, 33 years on. The double gold in sprints apart, Flo Jo was also part of the the 4x100m gold-winning US relay team and 4x400m silver medallist.

She became a multi-millionaire after the Olympics, earning millions through various endorsements. The Barbie doll even had a Flo Jo version. Famous for her choice of clothes and hair decoration, the one Flo Jo memory which will always remain with us is her painted nails.

Sadly, she died young, at the age of 38. She passed away in sleep due to suffocation and a severe epileptic seizure. 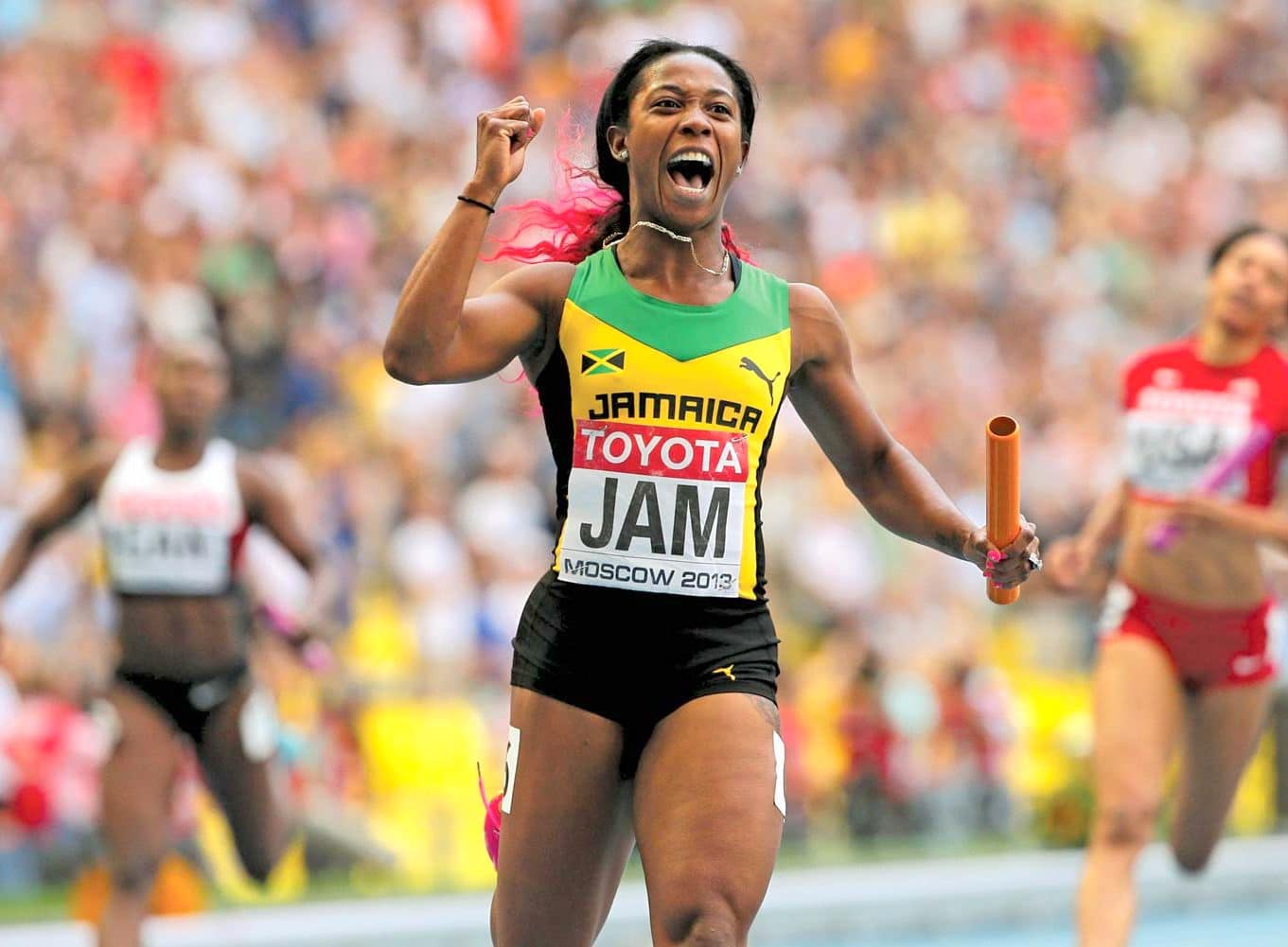 Fraser-Pryce may still have a few more great races left in her. But she is already regarded as one of the greatest female sprinters of all time.

Like numerous great athletes and sportspersons, Fraser-Pryce had a humble beginning. Her mother, who was also an athlete, was a street vendor. That’s why the Jamaican’s story is all the more remarkable.