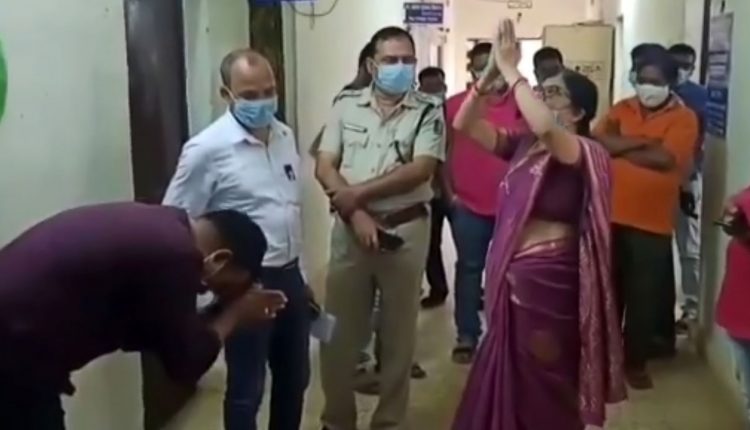 Nabarangapur: A government doctor posted to Tentulikhunti Nodal Health Centre near here since 2016 sat on dharna in front of District Headquarters Hospital here on Monday alleging harassment by the CDMO.

Doctor Sachhikant Lenka alleged that despite government’s tall talk about special privileges to doctors working in KBK districts, he does not have a staff quarters allotted to him and that he has not received any KBK incentives for the past five years. Alleging that his immediate bosses at Tentulikhunti had ignored his pleas for which he had come to meet Chief District Medical Officer Sobharani Mishra here only to be pulled up by her.

“Harassed and offended, I have decided to forego my KBK incentives and quit this job rather than live under humiliation,” Lenka told waiting newsmen with tears rolling down his cheeks.

Meanwhile, police personnel reached the spot and tried, in vain, to dissuade the agitating doctor from creating commotion in public. Consequently, Additional District Collector Bhaskar Rait reached the scene to intervene. But that too did not work.

Ultimately, the high drama concluded amicably after the CDMO came down to seek an apology from the doctor on stir to assuage his ruffled feelings.

When contacted CDMO Mishra, she advised the scribes to check the video footage at the hospital to see how the doctor had misbehaved with a senior person of her stature.

Why Is There A Sudden Spike In Bronchiolitis Cases Among Infants, Young Children?…

E-Cigarettes Are Not Safe, Have Harmful Chemicals: Research

Why The Bitter & Unappealing ‘Karela’ Is Actually Good For You!