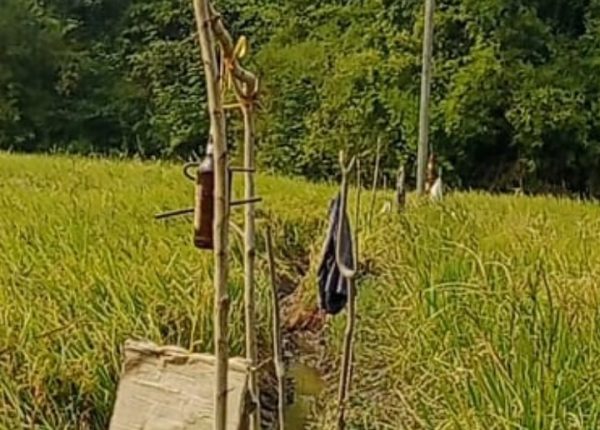 Berhampur: Farmers in Patrapur, Chikiti, Rangeilunda and other blocks in Ganjam districts have built upon a very old design of scaring birds and even wild boar from their paddy fields.

Birds become a costly problem for farmers. They gather in large flocks to damage the crops. Since it is inhuman to use poison, pellet guns or traps against them, the method followed by the farmers of Ganjam has been welcomed by all.

Instead of using visual methods to distract birds and animals like scarecrows, which is very common in India, these farmers in Ganjam are using audible bird scarers, which use noise stimuli.

The method is an auditory process in which the sound of a heavy glass bottle repeatedly and rhythmically hits a small iron rod tied with a baton and a string that hangs a cardboard swing in the air. The sound is much louder during the night and the birds and even wild boar hate to hear it, said a farmer. The device is very low cost and we are managing to protect our almost ripe paddy crops till the government opens the ‘Mandi’ during December, he said.

According to some experts, the Japanese use the primitive ‘Sozu’ method, which is the sound of a heavy pipe hitting a rock to distract pests and birds. Though many electronic, ultrasonic and laser bird deterrents are now used throughout the world, the simple, primitive and innovative sound-emitting bird deterrents in Ganjam are one of a kind, experts said, adding that this is not a feasible long-term solution to scaring birds away. The noise will be unpleasant to the birds initially and even make them fly away. But the pest birds will simply become accustomed to the noise and return, they said.

Most pest birds such as pigeons, sparrows, geese, crows, seagulls, and woodpeckers, have a normal audible hearing range of about 1 to 4 kHz, experts said.