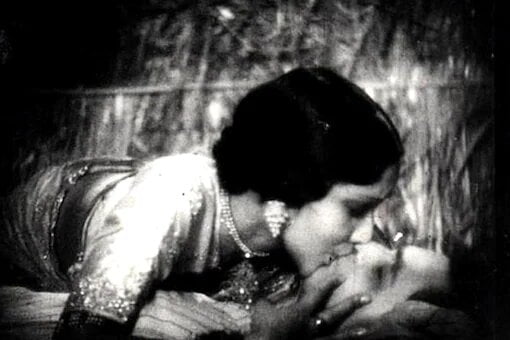 The number of kisses one sees in the trailer of the upcoming Deepika Padukone-Siddhant Chaturvedi starrer ‘Gehrayiaan’ must be double than all of Bollywood’s kissing scenes so far.

My father, a film buff, once told me how the country went berserk when Raj Kapoor gave the hint of a kiss to Nargis in a movie (either Shree 420 or Barsaat). According to him, hawkers ran around the streets flaying the day’s newspapers shouting, “Raj Kapoor ne Nargis ka bosa liya!” (Raj Kapoor has kissed Nargis).

From that day to the two roses suggesting a kiss (it would have to be a whole garden of roses if ‘Gehrayiaan’ had to be taken to flashback mode!), Bollywood’s kisses have come a long way. With ‘Gehrayiaan’ they have come of age.

However, much before the Raj Kapoor and Nargis ‘bosa’ scene, Indian filmmakers had already experimented with the kiss of love.

Seeta Devi was the first actress to lock lips with Charu Roy on the silver screen in her 1929 silent film ‘A Throw of Dice.’ The film is based on Mahabharata and is about two kings who are vying for a hermit’s daughter love.

Another popular actress, Zubeida, created a sensation in 1932 with kissing scenes in the film ‘Zarina’. Even Lalita Pawar, yesteryear’s vamp, had a kissing scene in ‘Pati Bhakti’ in the 1920s.

The scene that actually remained in memory was a four-minute kiss between Devika Rani and her director husband in the 1933 film ”Karma’.

Then there was a lull in the late 1940s, with the establishment of the Film Advisory Board and later the formation of the Cinematograph Act 1952. There was almost no sensuality

Till the mid-40s, Hindi films freely used bold content but with independence from British rule in 1947 and the establishment of the Film Advisory Board, the industry became more conservative and romance became discreet.

The 1950s-60s were the time of the ubiquitous two flowers as symbolic of kissing. Films like ‘Aaradhna’ suggested sensuality with burning logs in the song ‘Roop Tera Mastana.’

The 1970s-80s were bold with showman Raj Kapoor and his heroines, Dimple Kapadia, Zeenat Aman and Mandakini. His 1973 film ‘Bobby’ had a kissing scene between his son Rishi Kapoor and Dimple Kapadia. Shashi Kapoor and Zeenat Aman locked lips in the 1978 release ‘Satyam Shivam Sundaram.’ In 1985, Mandakini was filmed under a waterfall in a see-through saree in ‘Ram Teri Ganga Maili.’ Dancing diva Madhuri Dixit also kissed Vinod Khanna in the 1988 film ‘Dayavan’. Juhi Chawla and Aamir Khan also shared a kiss on screen in ‘Qayamat Se Qayamat Tak’.

Kissing became more common on celluloid in the 1990s, with Karisma Kapoor and Aamir Khan’s minute-long kiss in the 1996 film ‘Raja Hindustani.’

From then on, let’s say it’s history. Hrithik Roshan and Aishwarya Rai shared a kiss in ‘Dhoom 2’, Shahid Kapoor and Kareena Kapoor in ‘Jab We Met’ and Vidya Balan and Arshad Warsi in ‘Ishiqiya’.

That too is history by now because after that kissing scenes have been a dime a dozen.

Of course, OTT has taken kissing and lovemaking to the next level. But that’s another story.

No Khandagiri Mela In Bhubaneswar This Year Also; ‘Jatra’ Likely To Be Cancelled