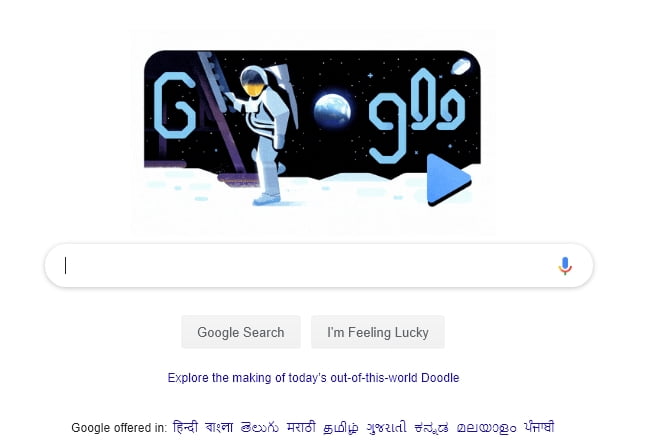 Google Doodle on Saturday hosted a video marking the 50th Anniversary of Apollo 11 Space Mission on its homepage. The animated video show the mission carried out by astronauts Neil Armstrong, Buzz Aldrin and Michael Collins.

The video has a voice-over of Apollo 11 command module pilot Michael Collins. Around  400000 people from around the world worked on the project, noted Google.

The historic journey took place on July 16, 1969. The Saturn V rocket took off from Florida’s Kennedy Space Center. After achieving orbit around the moon, the lunar module, known as “the Eagle,” separated for a 13-minute journey to the surface. Astronaut Michael Collins stayed behind in the command module.

The landing was telecast on television and millions watched it live. The safe landing on July 20, 1969 on the crater is referred as the “Sea of Tranquility”.

Amstrong’s first step on the moon is remembered as, “That’s one small step for [a] man, one giant leap for mankind.”

The crew returned back to Earth safely on July 25, 1969. They received a hero’s welcome. Google also noted that scientific breakthroughs such as CAT scans and frozen-dried food happened due to this mission.