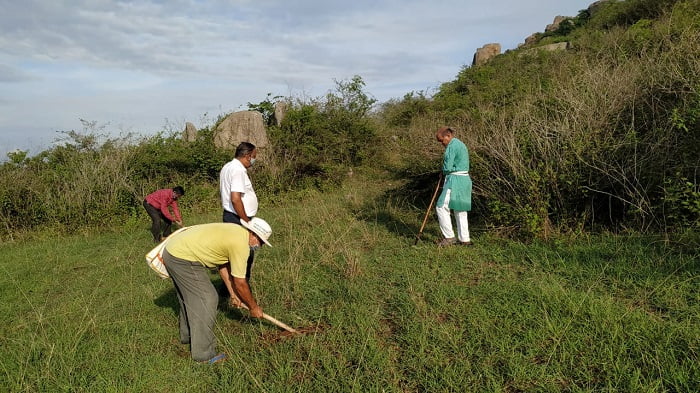 Berhampur: The hills in Ganjam district which had lost their greenery over the years due to natural calamities as well as man’s greed are all set to regain their flora.

The process for restoring the green cover of about 10 bald hills in Ganjam through community participation has resumed once again under the guidance of ‘Green Man’ Sudhir Rout. Rout has earned the  moniker for his efforts to take up plantation on bare hills turned fruitful.

“We have started sowing seeds and planting seed balls on Sarandi Hills, 18-km from Berhampur on the eastern-most end of Kerandimala Hill range, over an area of about 200 acres. The process started on July 8 and would continue till July 16. Presently, Sarandi Hills have turned bald and have no giant tree”, said Rout, chairman of Aryabhatta Foundation.

The foundation plans to plant two lakhs seeds through sowing and another two lakhs through seed balls, he said.

On Sunday, they sowed 30,000 seeds of different varieties including ‘Sishua’, ‘Akasia’, ‘Bada Chakunda’, ‘Bael’, ‘Neem’, ‘Tamarind’, ‘Jackfruit’, ‘custard apple’ that need planting or complex propagation. Planting the seeds through sowing is more effective as it has 70% survival rate. We also planted 50,000 seed balls (each ball of additives such as humus or compost contains 4 to 5 seeds). We scattered them on the top of the soil and nature will take care, he said.

More than 40 local people from Bhaliagada, Pannada, Manikpur and other neighbouring villages participated in the plantation programme that lasted for about four hours, informed Rout.

“When we sensitised the local villagers about the plantation, they realised it and came out to help us. They promised to help us in large numbers during the seedling process and protect the greenery of their locality,” he said.

Aryabhatta Foundation also started planting two lakh seed balls on Baniamari Hills on the Chikiti-Tamana Road on July 6. “About 50% of these seed balls are tamarind. We have planned plantation in such a way so as to facilitate the locals who mostly depend upon tamarind trade for their livelihood,” Rout who is also an educationist.

The Foundation is also trying to cover this 10 bald hills area with indigenous plants like bamboo, banyan, peepal and neem trees to help the livelihood of the locals and protect the ecology. Bamboo grows faster and bamboo shoot is in much demand as a food which would help locals, he informed.

Sudhir has spent Rs 32 lakh from his pocket to sprout greenery on planting 1.8 lakh saplings on the roadside in Ganjam district during the last 14 years since 2007.