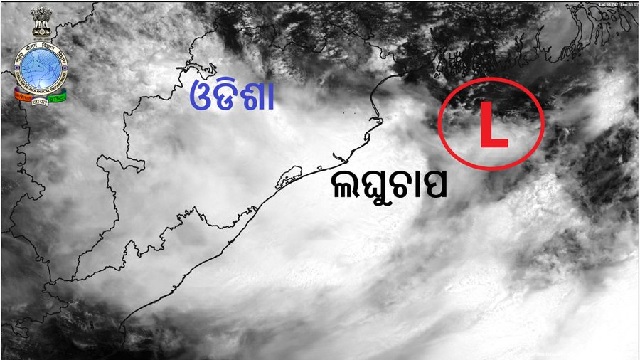 Bhubaneswar: A low-pressure area has formed over north Bay of Bengal, which is likely to become well-marked in the next 12 hours, informed the Meteorological Centre in Bhubaneswar on Saturday.

The low-pressure area is likely to intensify into a depression in the subsequent 24 hours on August 14.

Heavy to very heavy rain has been forecast, which is likely to cause inundation of low-lying areas, urban flooding and landslides in hilly areas.

The orange warning continues for the next day with heavy to very heavy rainfall (7 to 20 cm) at isolated places in Malkangiri, Koraput, Rayagada, Nabarangpur, Nuapada, Kalahandi, Balangir, Sonepur, Boudh, Kandhamal, Gajapati, Ganjam, Nayagarh, Angul, Sambalpur and Deogarh with extremely heavy rainfall (>20cm) at one or two places in Kalahandi, Balangir, Nuapada and Nabarangpur.

Fishermen have been advised not to venture into the seas till August 15.

The intensity of rainfall is likely to decrease thereafter with yellow warning for heavy rainfall (7 to 11 cm) issued for only four districts of Nabarangpur, Nuapada, Balangir and Bargarh on August 15.