Here Is What Leaders Are Saying About Patkura Poll Results 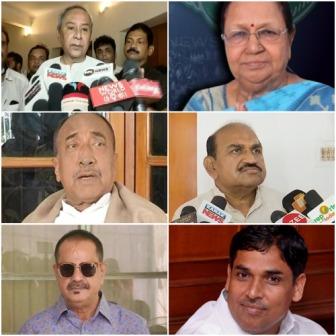 Bhubaneswar: With the BJD posting yet another victory in the most sought-after Patkura Assembly election, the leaders of political parties have expressed their views.

Here is what they have said.

Naveen Patnaik
I would like to express my deep gratitude to the people of Patkura for electing a BJD candidate in this election. We will continue to work hard for Patkura’s development and welfare.

Sabitri Agarwalla (BJD candidate)
I give the credit of my success to the party president and Chief Minister Naveen Patnaik and thank him for reposing faith in me. I thank the people of my constituency for electing me as their leader. I also thank my party workers for their effort.

Bijoy Mahapatra (BJP candidate)
I am utterly surprised by the Patkura poll results. But in a democratic setup, you have to give respect to the people’s mandate and their verdict. There might be some pertinent reasons like the manner in which the ruling party virtually took over Patkura through money and manpower, gross misuse of government machinery and distribution of money to the people on the plea of door-to-door campaign, which needs a thorough review.

Jayanarayan Mishra (BJP)
It is not surprising that the BJD has won the Patkura poll going by the manner in which it used money and manpower to ensure victory. The way the BJD had conducted the election, it should have won by a big margin.

Tara Prasad Bahinipati (Congress chief whip)
It is not a big deal that BJD won the election as it engaged the entire government machinery and distributed money to the people. BJD leaders had claimed that they will win by a margin of 30,000-35,000 votes. But the margin of victory was much less.

Arun Sahu (BJD)
In the Lok Sabha polls, the victory margin of the BJD in Patkura was 6000. We had tried to increase the margin and it has reflected in the Assembly election as our party has been able to get three times the number of votes. This proves that there is massive support among people for us.

Pet Dog Abandoned For Having An ‘Illicit Relationship’ In Kerala