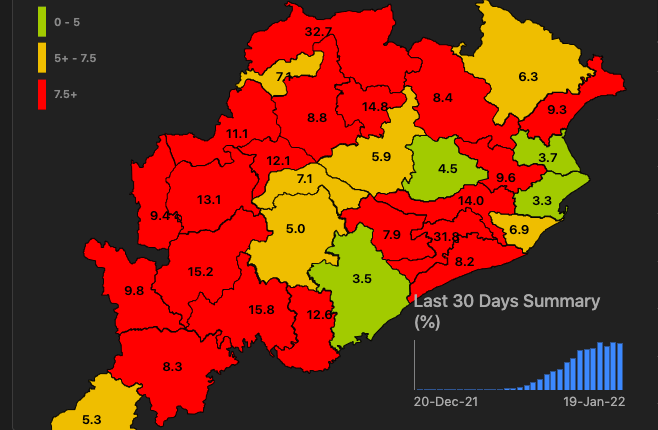 Bhubaneswar: After a gap of almost one week, the daily COVID-19 caseload dropped below 10,000 in Odisha on Friday. The test positivity rate, however, remained above 13 per cent, as was the case on Thursday, as 9,833 of 74,443 samples tested were found infected.

“Odisha is showing a downward trend, but it is not persistent and can’t be termed as peak/plateau,” said Director, Health Services, Bijay Mohapatra said.

He said that at least 2 weeks is needed to study the statistical importance of the downward trend in the number of positive cases.

A pandemic situation usually goes through an upsurge, subsequently plateau and then declining stage. When COVID cases remain at a constant level, it is termed a plateau stage.

The senior health official further said that higher positivity rate signifies that the state’s detection and surveillance system is good. “We have not decreased testing, it’s underway as per the guidelines and the target set by the government,” he said, adding that more testing and detection can help contain the spread of the virus.

Notably, Odisha is the 8th high burden state in the country.

He also urged people to get themselves tested if there are any symptoms.

The testing dropped further to 69,502 samples on January 18. Odisha has tested over 74,000 samples in the last two days.

Notably, the positivity rate had surged to 16.7 per cent on January 19 and dropped to 13.7 per cent the following day. It was 13.2 per cent on Friday.

Currently, 19 districts are in RED zone with positivity rate above 7.5 per cent. Till Januray 19, Sundargarh had the highest positivity rate of 32.7 per cent, followed by Khurda at 31.8 per cent.

With Odisha having reported over 20 deaths in last four days, Mohapatra said that 80-90 per cent of patients on ventilator support have less chances of survival. “The death risk is more in the case of comorbid patients,” he said.

The state had confirmed the highest of seven deaths due to COVID-19 on Thursday (Januray 20) while another six casualties were reported on Friday (January 21).

Stating that there is no data about the emergence of new variants, so far, the Health Services Director hoped that the future mutations would be weaker.