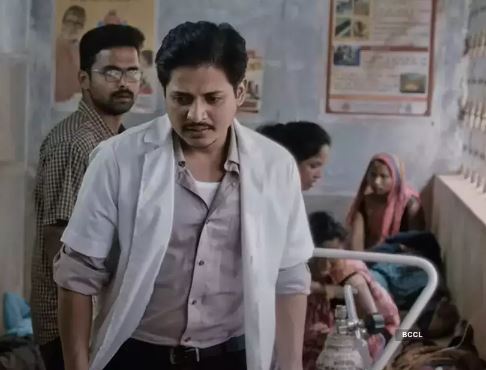 Bhubaneswar: The official Hindi trailer of the Odia cinema ‘DAMaN’, starring Babushaan Mohanty and Dipanwit Dashmohapatra in lead roles, was released on Friday. The movie is all set to hit theatres on February 3.

The movie created a buzz and climbed to 9.7 on IMDB rating, the highest for any Odia film on the platform so far, after being released in 51 cinema halls in Odisha on November 4 last year. It was also shown in 15 theatres in six cities, including Delhi, Mumbai, Bengaluru, Hyderabad, Raipur, and Ahmedabad with a good number of Odia population for a week. All the shows within the state and outside saw a packed house. The Odisha government had declared it tax-free in the state.

While voice-over artist Sanket Mhatre has dubbed for Babushaan, actor Chandan Roy lent his voice to the character played by Dipanwit in the Hindi version of ‘DAMaN’.

Writer-director Vishal Mourya co-wrote and co-directed the movie ‘DAMaN’, which stands for Durgama Anchala re Malaria Nirakarana (Malaria Eradication in Inaccessible Areas), with Debi Prasad Lenka. It has been produced by Deependra Samal and made with a budget of nearly Rs 1 crore.

Significance Of The Movie

DAMaN scheme was launched in 2016 and implemented in all 8,000 villages of all 79 blocks of eight highly malaria-endemic southern Odisha districts – Koraput, Malkangiri, Nabarangpur, Kalahandi, Rayagada, Gajapati, Nuapada and Kandhamal. Camps for screening, treatment, and awareness programmes were undertaken extensively resulting in a substantial reduction in malaria cases. The total CHCs having an annual parasite index (API) of less than one increased from 273 to 285 within the same period.

Plot Of The Movie

The film shows the story of a fictional character Siddharth Mohanty, a young doctor who completed his MBBS from Bhubaneswar and has been posted to Janbai primary health care (PHC), a cut-off tribal area in the Malkangiri district.

As per the guidelines of the Government of Odisha, medical students studying in government-sponsored medical courses have to serve in tribal or rural areas of Odisha for five years otherwise they have to pay Rs 5 crore bond price. So, Siddharth has to go there against his wish. Janbai PHC has 151 villages under it and is infamous for Maoist dominance with no basic facilities. The movie is about his journey, fighting all odds to help and make people aware of healthcare facilities.

Also Read: Running Houseful Across Odisha & Outside, Odia Movie ‘DAMaN To Be Released In Hindi