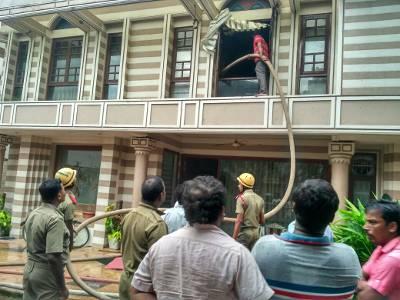 Bhubaneswar: Commissionerate of Police on Tuesday seized the hard disc of the CCTV installed in the house of Pal Heights’ owner Satpal Singh and sent it to the forensic laboratory for crucial leads to ascertain the cause of the massive inferno, which claimed five lives on August 3.
“We have sent the hard disk to retrieve data and only after we get detailed reports from different agencies, including the fire department, a clear picture will emerge,” said DCP Satyabrat Bhoi.
The day also saw a team of police and forensic experts conducting fresh investigation at the spot and questioning the family members.
With conspiracy theories doing the rounds, the cops suspect some tampering with the date settings of the CCTV.
Singh’s younger son Gaganpal Singh (39), his daughter-in-law Bhavna (38), granddaughter Suhavi (12), grandson Ruveer (4) and their minor domestic help, identified as Tanu Das, were killed in the fire mishap.