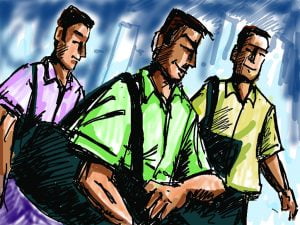 Bhubaneswar: Taking advantage of the absence of a married woman who had gone to take COVID vaccine, some miscreants looted her house in the capital city on Wednesday.

According to sources, the burglary took place on Tuesday when Sasmita Mohapatra of Kalinga Nagar locked her house and left her two children with a labour family staying as her neighbour to go to take the vaccine. Her husband was not present at the time as he had gone out on work.

Later, she filed a complaint in this regard at Tomando police station. Acting on the complaint, police went to the house for investigation. A forensic team also took the finger prints from the locker.

Police suspect that the robbery was committed by more than one person. They must have kept a watch on daily activities of the family and finding the house vacant, they committed the crime.

State Of Governance 3: Bureaucrazy! For Odisha’s Babus Rules Are Made To Be Broken?