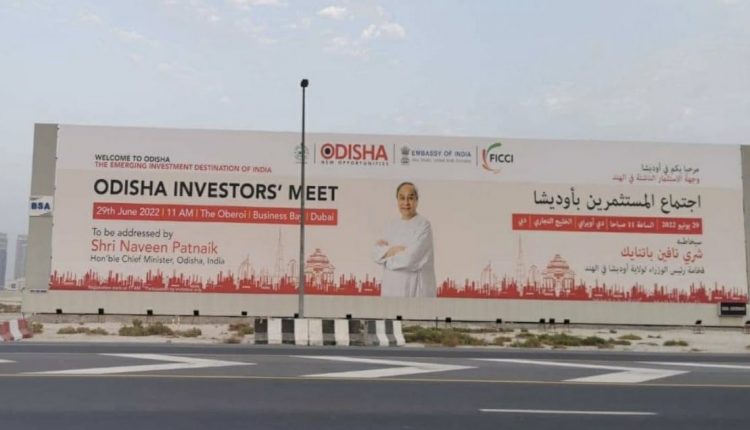 Dubai: Huge billboards advertising the participation of Naveen Patnaik, the first chief minister of the eastern Indian state to visit the UAE, in the Odisha Investors’ Meet 2022 have appeared on Sheikh Zayed Road and Al Khail Road.

Naveen, who travelled to Dubai from Rome late on Sunday, has been joined by Odisha’s food supplies and consumer welfare minister Atanu Sabyasachi Nayak and senior BJD MLA Debi Prasad Mishra. The meet on Wednesday is being jointly organised by the Government of Odisha and the Federation of Indian Chambers of Commerce and Industry (FICCI) and the CM would be sharing his thought on Odisha as an emerging investment destination in India, official sources said.

“My government is extremely keen to forge strong socio-economic ties with the UAE and the MENA [Middle East and North Africa] region and develop long-term mutually beneficial relationships. Therefore, I am personally here with my team of senior government officials to present the vast existing and emerging opportunities in Odisha for businesses in the UAE,” Naveen told Gulf News.

Stating that he is looking forward to meeting the representatives of leading companies and industry associations in this region, Naveen said that the industrial sectors like petrochemicals, chemicals and plastics, metals and advanced electronic manufacturing are completely aligned with the inherent strength of Odisha.

His itinerary also includes interaction with non-resident Odias living in the MENA region. More than 100,000 Odisha natives are living and working in the UAE. “We have a strong people-to-people relationship between both regions. Odia cultural associations have played an integral part in promoting the Odia culture in the UAE and the Middle East. They organise cultural programmes and celebrate ‘Utkal Diwas’ (Odisha Day) every year. I am sure that they will further play an important role in deepening the ties between UAE and Odisha,” the report quoted him as saying.

On Monday, Naveen visited the Sheikh Zayed Mosque in Abu Dhabi. “The marble dome of Sheikh Zayed Mosque, Abu Dhabi is an epitome of magnificence with intricate inlay work inspired by Moghul architecture. I am told, the artisans and the marbles also came from Makrana village of Rajasthan. A bit of India, everywhere,” the Chief Minister tweeted and posted a video of the visit.