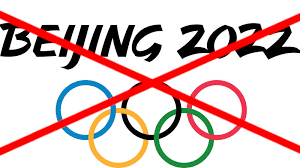 Tokyo: Beijing Winter Olympics 2022 is facing boycott demands amid human rights violations. International Olympic Committee, IOC has been approached by a group of human rights activists to correct its decision of awarding Beijing the right to host the Winter Olympics in 2022.

In a letter, the group asked IOC to “reverse its mistake in awarding Beijing the honour of hosting the Winter Olympic Games in 2022.”

IOC held an executive board meeting on Wednesday in Switzerland. Human rights groups representing Tibet, Uighurs in China’s Xinjiang region, Hong Kong, and others presented IOC President Thomas Bach to move the games from Beijing in view of the violation of human rights.

During the Beijing 2008 Olympics, China faced violent protests due to its repression in Tibet, the exile of the Dalai Lama, and the mistreatment of ethnic minorities. Human rights activities fear the protests may happen again.

According to an Indian Express report, the letter said that the 2008 Olympics failed to improve China’s human rights record and since then, it has built “an Orwellian surveillance network” in Tibet and incarcerated more than a million Uighurs, a mostly Muslim ethnic group.

It listed a litany of other alleged abuses from Hong Kong to the Inner Mongolia region, as well as intimidation of Taiwan.

However, China has repeatedly been denying the charges and accused other countries of interfering in its internal affairs.

“Through vocational education and training, Xinjiang has taken preventive counter-terrorism and de-radicalization measures, effectively contained the once frequent terrorist activities and protected the right to life, health, and development of all ethnic groups to the best extent,” foreign ministry spokesperson Hua Chunying said last week.

“The world must ask whether China, slowly strangling an entire people, has the moral standing to host the 2022 Winter Olympics. We think not,” The Washington Post said.

Regarding the Winter Olympics, after European cities such as Oslo and Stockholm dropped out, IOC only had two bidders to chose from, Beijing and Almaty, Kazakhstan.

“Awarding the Olympic Games to a national Olympic committee does not mean that the IOC agrees with the political structure, social circumstances or human rights standards in the country,” the IOC said in an email to the Associated Press.

The IOC said it has “received assurances that the principles of the Olympic Charter will be respected in the context of the games.”

It added it must remain “neutral on all global political issues.”

Meanwhile, IOC is facing extreme pressure due to the postponement of the Tokyo Olympics to 2021, hampering the finances of the body due to the coronavirus pandemic.

Breakdancing Now An Olympic Sport, To Make Entry In 2024…