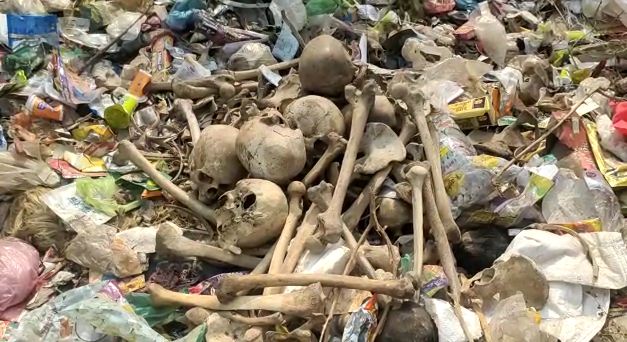 Bhubaneswar: Police on Friday said the human skulls and bones found at a garbage dump in Mancheswar this week had been sent to AIIMS for scientific analysis.

Addressing mediapersons, DCP (Bhubaneswar) Umashankar Dash said a preliminary examination found that the human remains were old. A scientific team visited the spot, examined the skulls and bones and collected soil from the spot for further examination.

He said that only a scientific analysis by experts at AIIMS will offer possible clues or answers to questions like how old the skeletons were, their age, whether they were men or women.

He added that during the police inquest, nothing suspicious was found.

On March 26, more than a dozen skulls and human bones were found by ragpickers under Injana bridge near Patia railway station.

Mancheswar police and a scientific team rushed to the spot and seized the skeletons.

Police said the skeletons seemed to have been buried under earth for sometime.

As there are cemeteries near the place, it is suspected that the bones could also belong to bodies that were buried in the past.

New-Look IPL Gets Rolling Tomorrow; Here’s All That You Need To Know