I Felt Like An Outsider In Bollywood: Shruti Haasan 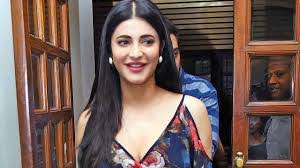 Mumbai: Actress Shruti Haasan, who will soon be seen in the upcoming Bollywood film ‘Yaara’, revealed that she always felt like an outsider in Bollywood despite being a star kid.

During an interview with Hindustan Times, when asked about the ongoing nepotism debate, Shruti stated that though her surname opened the doors for her in the film industry, she never asked her parents to promote her or get her a film.

Shruti, who is the daughter of superstar Kamaal Hasaan and Sarika, feels she is not welcomed in Bollywood despite being a star kid.

She further said that there is always a comparison between North and South in Bollywood. When she does more films in the south, she is taunted for not doing Hindi movies.

“When it comes to the insider-outsider discussion, I honestly have many times felt like an outsider, especially in Bollywood, there is a whole North-South thing that constantly happens. For example, if I’m doing three Telugu films and three Tamil films, they’ll say, ‘Oh, but you’re not focusing on Hindi,’ as if that is the only industry in the country. And it isn’t. So I have always felt like an outsider,” Shruti told Hindustan Times.

“Yes, my surname has opened doors but staying inside for 11 years now has been my journey. I have never had my parents make a phone call to promote me or get me a job or help me. I have done this on my own, but I do understand that the door opened because of the surname, there’s no denying that. It would be absolutely irresponsible of me to deny that,” she added.

The film revolves around relationships, betrayal, trust, and the circle of friendship. The movie is slated to release on the OTT platform.

Speaking about the film, Shruti said, “I play the character of Sukanya in this narrative. The film that starts in the late 70s and kind of continues into the 90s, so I had the chance to play a younger as well as older woman, which was really exciting for me. Sukanya is extremely strong-willed and with strong political opinions. The film starts with the ‘chaukdi gang’ – these four guys – and her insertion into the story changes the milieu of it.”