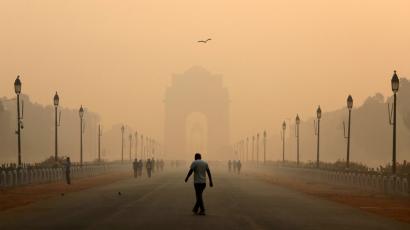 An IIT Delhi team will use a sensor-based pollution monitoring device to study the impact of the odd-even scheme in the national capital. The Delhi government is set to implement the car-rationing scheme for the third time from November 4.

The team will monitor the traffic scheme’s effectiveness in improving air quality from October 15 to November 15, news agency PTI reported.

The six-member team has invented the monitoring device called ‘Eziomotov’, which has been patented and has received ICAD certification. It was invented through the incubated start-up ‘Aerogram’.

“The Eziomotov devices will be placed on top of around 250 buses running in Delhi to gauge air quality. The devices will help calculate Particulate Matter (PM), heat, temperature and humidity across different terrains, traffic movement, weather and times of the day. We have tied-up with the Delhi Integrated Multi-Modal Transit System (DIMTS) for the purpose,” PTI quoted Pooja Singh of IIT Delhi’s incubation unit.

“Each bus makes 16 trips daily, covering different routes with each of them being around 30 to 40 kms long. The devices have a camera and are GPS enabled so we can also track the vehicle’s movements,” she said.

The study will be conducted in two phases – pre-odd-even and during odd-even.

“To analyse whether the scheme was impactful or not, we also need data of preceding days to compare with. Hence it will be done in two phases and we will analyse whether the quality improved or not during Odd-even. And if yes, by how much percentage,” she added.

The IIT’s Centre of Excellence for Research on Clean Air, had provided the initial funding for the project. Other members of the team include Manoj Sahukar, Faheem Ashraf, Sahil Siwach, Bhaskar Dutt and Surbhi Kumari.

An earlier study by IIT-Delhi researchers in 2016 had found that the rationing of vehicles on Delhi’s roads reduced air pollution by 2-3 per cent when the odd-even scheme was introduced for the first time. However, the methodology and devices for the study were different.

‘Most Trusted University’ Award For SOA Deemed To Be University In…

AIPH University Organises ‘Cycle-A-Thon’ To Promote Awareness On Save…