Rayagada: After years of research, Soni Salma Priyadarshini, an IIT student and a native of Rayagada district, has finally succeeded in digitising the Saura script to disseminate the culture and tradition of the Saura tribe and enable the tribal students to pursue studies.

As the process of digitisation of Saura script is in the final stages, the script will be computerised and the textbooks will be published for teaching in the Anganwadi centres and primary schools.

Talking to the media, Salma said she has digitised the Saura script in association with Prof Girish Dalvi of IIT-Mumbai. 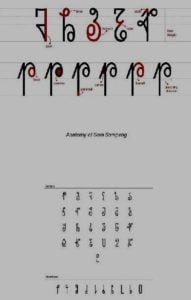 The Rayagada girl got admitted to the IIT-Mumbai in 2014 to pursue her study in Industrial Design. During her study, she had done a project on Typography and did a research on the digitisation of Saura script prepared by a Sabar scholar (pundit) Mangei Gamang of Rayagada district.

“I was doing a job in a big company in Germany. Though I was getting a hefty salary, I left the job and came back to Rayagada to do further research on Saura script. As I have completed the digitization, the script will be computerized. But as the coding is necessary for the publication of the textbooks, I will complete it within a few days,” Salma added.

She said the publication of the textbooks will benefit more than 30,000 Saura tribals of Ganjam, Gajapati and Rayagada districts.

It may be mentioned that out of 62 tribal communities in Odisha, the spoken languages of five communities have been digitised so far.

Fortnight Inspection Of Fire Safety In All COVID Hospitals In Odisha

Forest Officials, Stakeholders Gear Up For Mass Nesting of Olive Ridleys in…

Over 1 Tonne Of Ganja Seized In Truck Stolen From…