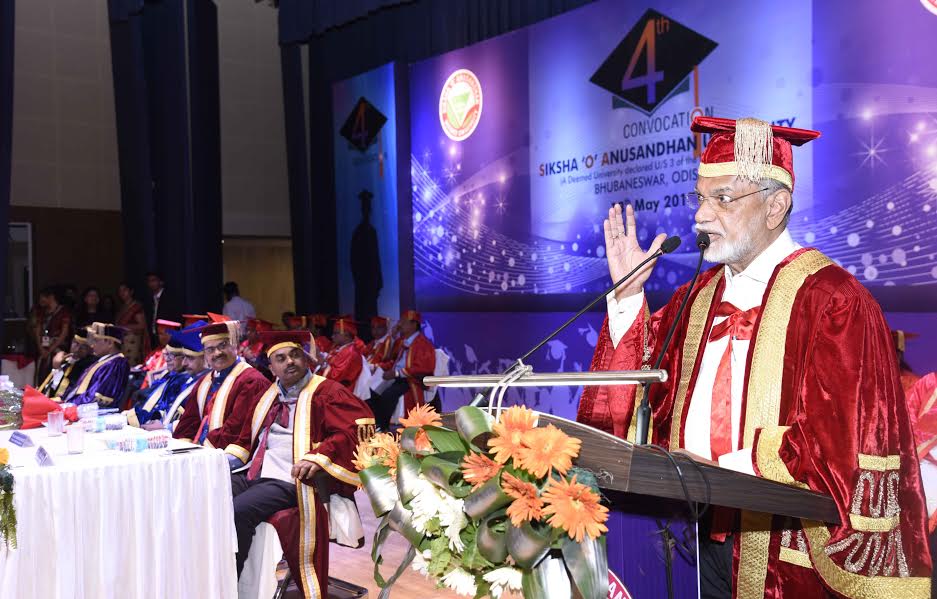 Bhubaneswar: After becoming the first Asian country to orbit a spacecraft around Mars and the first in the world to succeed in the very first attempt, India is now on the threshold of climbing the next level of technology ladder, said former Chairman of Space Commission and ISRO Dr K Radhakrishnan here on Saturday.

“India’s ‘Mangalayan’ mission was executed with commendable precision and the spacecraft is still healthy exploring planet Mars and sending data regularly to the Indian Deep Space Earth Station near Bengaluru,” Radhakrishnan, formerly secretary in the Department of Space, said while delivering his address at the 4th Convocation of the SOA University here.

‘Mangalayan’, as India’s Mars Orbiter Mission (MOM) is popularly known, was essentially a mission to demonstrate the country’s technological capability to orbit a spacecraft around Mars, a university release quoted him as saying. “India is now on the threshold of climbing the next level of technology ladder, embracing international alliances for newer capabilities and fostering national space industry to meet national and global needs,” he added.

Stating that the ‘world watched with awe’ as India became the first country to fly a spacecraft around Mars in its very first attempt on September 24, 2014, Dr. Radhakrishnan said any deep space mission like ‘Mangalayan’ was complex, risky and challenging as compared to placing a spacecraft around the earth or moon.

“A mission to Mars is feasible in a specific Earth-Mars-Sun geometry that occurs only once in 26 months. In the case of Mangalayan, the spacecraft was to traverse close to 660 million km in about 300 days undergoing pressures exerted by the radiation and gravitational forces of the sun and other planets,” he said. It was a huge computational challenge to predict the magnitude and impact of these forces and their impact as the spacecraft approached Mars, he noted.

Technological excellence apart, the Mangalayan mission was lauded for clever use of a relatively low-capacity launcher PSLV to get off the gravity of earth and meticulous operations all through these years for this path-breaking mission which was possible due to the efforts of a brilliant and motivated team of scientists and engineers, he said.

Lauding the SOA University for figuring in the list of top 20 of the country’s best universities as per MHRD’s assessment through National Institutional Ranking Framework (NIRF), Radhakrishnan urged the students to think and be innovative while inculcating the spirit of leadership.

“Education in general, will have to become more vibrant, responsible and responsive to realize national goals of economic growth, rural livelihood security and employability of its graduates,” he said, pointing out that increasing intensity of application of new knowledge in science and technology would become the prime infuser in surge in production and productivity across diverse agro-ecologies of the country.

“It will be necessary to restructure education in a manner that it measures up to diverse expectations of all stakeholders such as students for employability, farm men and women for livelihood security, new knowledge and skills and the country for economic growth and concerns of sustainable development,” he observed.
Both Radhakrishnan and Mohapatra along with two other distinguished personalities, Scientific Advisor to the Defence Minister and Director General (Missiles and Strategic Systems), DRDO G Satheesh Reddy and former civil servant and Chairman and Professor, Centre for Corporate Governance and Social Responsibility, International Management Institute, New Delhi, Prof Arun Kumar Rath were conferred with Honoris Causa by SOA University for their contribution to the nation on diverse fields.

Chancellor of the University Prof Khageswar Pradhan presided over the programme while vice-chancellor Prof Amit Banerjee presented the report. The varsity’s registrar Prof B B Pradhan was also present. A total of 121 scholars were presented with Ph.D degree by the university while 92 students were presented the University Gold Medal for academic excellence and seven received the Chancellor’s Gold Medal for their all round performance.

Rituraj’s voice to resonate in Odisha this Raja festival