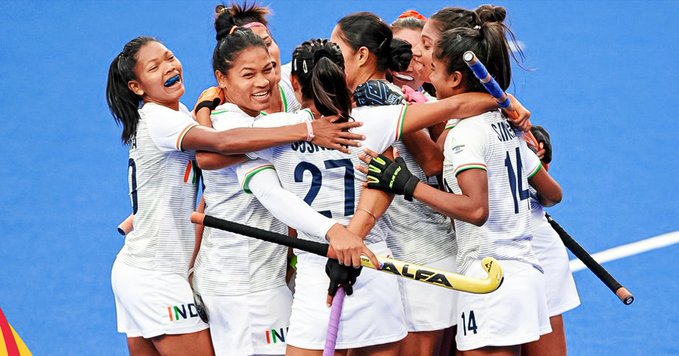 Birmingham: Skipper Savita Punia led from the front to end the medal drought at the Commonwealth Games as Indian women’s hockey team defeated Gold Coast 2018 champions New Zealand 2-1 in the penalty shootout on Sunday to win bronze after the stopwatch controversy.

This is the team’s first in 16 years.

“This match was very tough for us and both teams made a good effort. We knew it wouldn’t be easy, so before we came, we worked every minute and every second. I am so proud. We fought as a team,” the captain was quoted as saying by Olympics.com.

India conceded its 1-0 lead with less than 30 seconds to go for the final hooter after Olivia Merry’s equaliser and the match went into a shootout. Punia then pulled off three spectacular saves to give her side its third CWG medal.

India had won gold at Manchester 2002 and silver at Melbourne 2006.

President Droupadi Murmu congratulated the Indian Women’s hockey team on the win. “Your spirited performance and teamwork have won the hearts of each Indian. You have made India proud. May you bring more laurels for India,” reads her tweet.

Chief Minister Naveen Patnaik also congratulated the team for their courageous show.  “May the team continue to bring glory and make the entire nation proud,” he added.