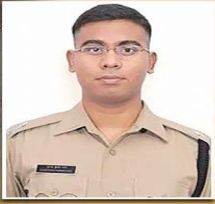 Kanpur: The Indian Police Service (IPS) officer, who was in a critical condition after consuming a poisonous substance, died at a private nursing home on Sunday.

The 2014-batch officer identified as Surendra Kumar Das (30) was posted in Kanpur as Superintendent of Police City (East).

Das, who hails from Ballia in Uttar Pradesh, had attempted suicide on September 5 at his official residence and was rushed to the hospital by his staff.

A suicide note recovered from the spot where the incident took place mentioned family issues as the reason behind the extreme step. The letter was addressed to his wife, who is a doctor, and further stated that he loved her a lot.

The letter also stated that no one else was responsible for it.

Many organs of the officer’s body had stopped functioning properly. He was put on life support in the intensive care unit of the nursing home after his condition worsened on Saturday.

Das was under severe mental stress for the past few days and had searched a website looking for ways to commit suicide in an easy way. Later, he had consumed sulphas powder that he had asked his domestic help to bring from the market for killing rats.