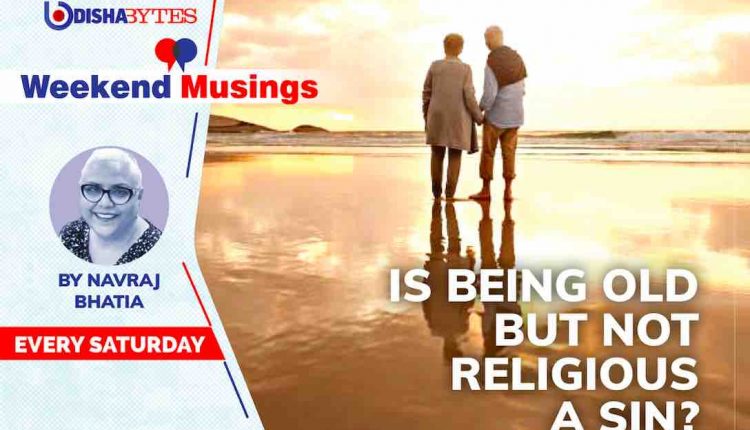 For some strange reason, growing old and being spiritual is considered synonymous in our society. Being otherwise is almost a crime. ‘Old and spiritual’ is acceptable but ‘old and unspiritual or unreligious’ is not.

Officially graduating to being a senior citizen at 60 (when the government also thinks you are no longer any good but that is not applicable to politicians of course) comes with the baggage of expectations from family and society of conforming to set standards. ‘Senior citizens’ who show any other inclination are shown their place. Who hasn’t heard ‘Aap aaram karo, aap ke bhajan kirtan ke din hain’.

A person who was working actively till yesterday is suddenly expected to spend the better part of their day in a place of worship. Here is a very common conversation:

Tell me why can’t we give a better, more productive direction to the older generation? Is this the only way they can earn our respect? Why are we so patronising about older people vs. religion and spirituality?

As a society, we thrive on stereotypes. We are fed on images of older people sitting in a religious congregation, doing the laughing exercise in a park, looking dotingly at grandchildren and in worst situations, wallowing in self-pity or grief. Any other image is anathema.

An older woman wearing bright clothes and choosing to socialise with friends over taking care of grandchildren or going to satsang is looked at with disdain. She is expected to wear ‘sober’ clothes, no lipstick or a light shade that behoves her age. And if she is a widow, anything that has the fun element is forbidden territory.

Sadly, such is the conditioning that women themselves respond in the manner they are expected to by society.

Older men have it no better. The satsang rule applies to them too. They are expected to be hands-on at dropping and picking grandchildren from school. The widower has it really bad. This category of men is considered really demanding, especially when it comes to their morning cup of chai. A fun-loving older man who loves his drink and the company of other people over matters of religion is often labelled tharki.

Please, let us cut some slack and not be judgemental about the choices that the older generation makes. We have no right to thrust religion and spirituality on them. So what if they choose to travel to an exotic destination instead of embarking on a pilgrimage; if they go to a club over a place of worship or if they refuse to take care of the grandchildren? Why is it a given that grandparents should love grandchildren? Maybe they find the little ones pesky. Maybe having brought up their own children, they’ve had their fill of parenthood. Why do we have a fixation with trapping one another unfairly by putting a halo around all such relationships? Clearly, choices are what others make for us.

It is unfair to design our own lives by limiting the old age of our parents. A common advice to a girl getting married in a joint family is to either take up a job or plan a child till the parents-in-law are physically active Bachche pal jaate hain dada-dadi ke saath. And poor dada-dadi are expected to live up to the age-old adage Sood mool se bhi pyara hota hai (the interest is always dearer than the principal amount) whether they like it or not.

It is time we feed our society on images of older people freaking out, travelling, flirting or cosying with each other, playing a sport (not carrom board and ludo please), swimming, eating and making merry in clothes of their choice (most important).

Just let them be. Let them make a choice. Don’t make them feel guilty. And be there for them. They deserve it!

And now, you might want to ask, how come I have such lucid thoughts on this topic? Well, one reason is that I have seen enough of it around me and the other, I myself am on the wrong side of my 50s and am inching closer towards becoming a senior citizen.

So, what will it be for me? Club or satsang? Any guesses?

Disclaimer: The words ‘satsang’ ‘bhajan’ ‘kirtan’ in this article are generic terms to refer to religious gatherings in a community.