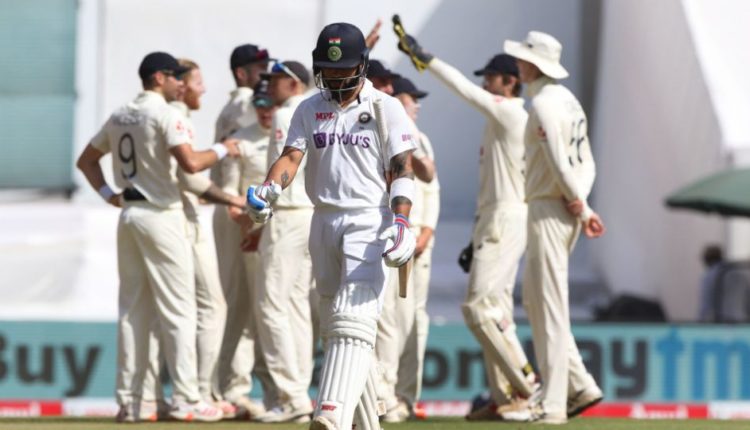 A closer look at his totally unproductive knocks in the longest format of the game will suggest so.

When the Team India captain edged a Ben Stokes delivery to wicketkeeper Ben Foakes on the second morning of the fourth and final Test at Narendra Modi Stadium in Ahmedabad on Friday, it was the 12th time that he had been dismissed for a duck in Test cricket.

And of those 12 occasions, 5 were against England.

Not just that, it was the second time that Kohli was out without scoring in the current series. Moeen Ali had castled him with a big off-break in the second Test at Chennai last month. That, by the way, is the lone occasion when a spinner has got Kohli out for zero.

There’s more of the English connection. This is the second time they have got Kohli out for ducks twice in a series. In the 2014 Test series, played in England, Liam Plunkett and James Anderson were the successful bowlers.

Kohli also caught up with MS Dhoni’s ‘unwanted’ record of being the captain with most ducks in Test cricket (8).

As for his achievements, the Indian captain has scored a staggering 70 international centuries (27 in Tests, 43 in ODIs).

1. Vs West Indies at Bridgetown in 2011 (bowler Ravi Rampaul)

2. Vs Australia at Melbourne in 2011 (bowler Ben Hilfenhaus)

4. Vs England at Manchester in 2014 (bowler James Anderson)

8. Vs Australia at Melbourne in 2018 (bowler Pat Cummins)

IT Raids: Taapsee’s Boyfriend Shows Concern, Minister Tells Him To Mind His Business