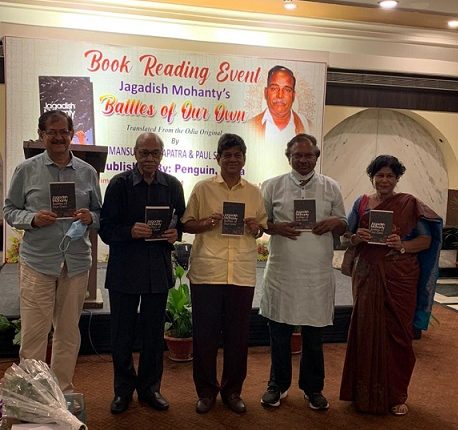 Bhubaneswar: A book reading event was held for “Battles of Our Own” at the Hotel New Marrion in Odisha’s capital on Tuesday. The book is an English rendering by Himansu Mohapatra and Paul St-Pierre of Jagadish Mohanty’s Odia novel ‘Nija Nija Panipatha’. The book is published by Penguin India under their signature imprint of Modern Classics.

Speaking at the beginning, Mohapatra combined welcoming remarks with a tribute to Odia literature and translation. Citing Penguin’s small corpus of translated Odia titles, he said it was a time for celebration as well as of the challenging road ahead of us.

Gracing the ceremony as chief guest, Editor and Khandapada MLA Soumya Ranjan Patnaik harped upon the crucial role played by translation in taking Odia literature beyond the confines of Odisha. Translation, he said, can perform this task of exporting Odisha only when Odia literature itself is unafraid to explore new frontiers of knowledge and experience. Patnaik further said that experience was not simply a matter of what happened to writers in the course of their lives, but was a matter of what they did to what happened to them. Jagadish Mohanty’s own writing, being an example of this, was worth emulating, he said.

Sarojini Sahoo, the wife of the late Jagadish Mohanty, shared her memory of the time when the Odia novel was being built brick by brick in Katha magazine in the 1980s. She revealed fascinating details about the real life personalities who made their way into the pages of the novel as fictional characters.

Pradosh Ch Mohanty, who joined as a guest speaker, said that the book was to be reckoned within Odia literature because of the poignancy with which it narrated existential questions of choice, commitment and integrity. He said “Battles…” was a crucial bridge connecting Odia literature to world literature.

Ananta Mahapatra, who presided over the ceremony, appeared in the role of a magician at the end and mesmerized the audience with his dramatic reading of the first chapter of “Battles of Our Own”. Lights in the Zed hall of the New Marrion were switched off to allow the audience to become auditors and soak in an experience that was truly multi-sensory.

The ceremony was rounded off by Dr S Deepika, Assistant Professor of English, Utkal University, extending a vote of thanks at the end.