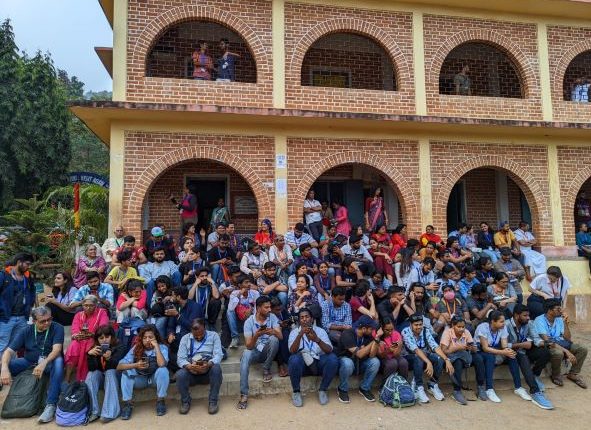 Berhampur: Jagriti Yatra, the annual 15-day inspiring train journey which takes around 500 motivated youths and introduces them to social entrepreneurs involved in building the society, halted at Berhampur railway station in Odisha’s Ganjam district on Sunday.

The youths interacted with Joe Madiath, one of the well-known social entrepreneurs in India and the founder of Gram Vikas, an NGO based in Ganjam district. Gram Vikas uses concerns for water, sanitation and education to unite and empower rural communities, including Adivasis and recently took upon the task of preserving electricity in a solar grid with lithium-ion batteries.

Later, the Yatris saw a documentary on the Gram Vikas Model and visited Tamana village and Kankia school. The day ended with ‘Pulse Check’ of the Yatra and New Year celebrations.

Jagriti Yatra aims at starting a mass movement by inspiring the youths to take up enterprise-led development. The Yatra, in in its physical format after the COVID pandemic, is carrying aspiring entrepreneurs on exploration of small towns and districts for 15 days from December 24, 2022 to January 8, 2023 on a train journey.

During the journey across the nation, they would explore, understand and learn from the ‘Middle India’ – small towns and districts. They will interact with eight role models at key locations where the train stops and participate in business plan competitions. The programme has been running for 14 years. It has created an alumni network of 6,000 young leaders, with 40% women participation and 28% rate of enterprise creation.

The Yatra will have speakers like Ravindra Sannareddy, Managing Director of Sri City; Sridhar Vembu, co-founder and CEO of Zoho Corp; Nithin Kamath, founder and CEO of Zerodha and Nivedita Bhide, All India vice-president of the Vivekananda Kendra, Kanyakumari.

Teacher Hacked To Death By School Peon In Odisha’s Malkangiri