The Jawaharlal Nehru University Teachers’ Association (JNUTA) has come out in support of the ongoing student agitation, which broke out into a massive protest on Monday during Vice President M Venkaiah Naidu visit to the campus for the convocation function.

The teachers’ body held the vice-chancellor M Jagadish Kumar squarely responsible for the unrest and demanded his resignation, alleging that the students were brutally beaten up by the police at the behest of the VC. “The police action was clearly only to defend the obstinate refusal of the VC to engage in any dialogue with students on their concerns”,” JNUTA president D K Lobiyal said in a statement.

The student agitation, which has stretched for almost two weeks now, took a dramatic turn on Monday. The agitators clashed with the police when they were stopped from marching to the convocation venue. Soon, the clashes escalated into a huge protest as hundreds of students joined in with placards. At one point, the police were seen using water cannons to control the situation. 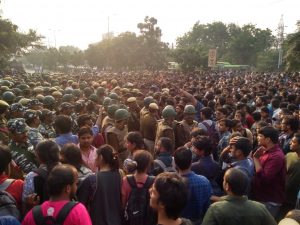 Some media reports also claimed that Minister of Human Resource and Development Ramesh Pokhriyal Nishank, who had come for the convocation, was not allowed to leave the campus till around 5 PM.

The Ministry, though, in a tweet said Nishank met some students and assured to find a solution to their issues soon.

Till the time of filing this report, the students were continuing with their protest, seeking to meet the VC.

Their demand:
Withdrawal of the draft hostel manual, which they claimed has provisions for the hostel fee hike, dress code and curfew timings.

Avdesh Kumar, a student of Economics from Bihar, told Odisha Bytes that he might have to leave his course midway if the university does not roll back the fee hike. “The hike of Rs 7500 proposed per month is equal to my family income back home. It’s beyond comprehension for me,” he said.

Kumar said most of his fellow inmates in Ganga hostel in the campus, are from lower-income families and have made it to JNU only through merit.

According to JNUTA statement, many teachers spoke at the assembly organised by the association and drew out the implications of the hostel fee hike for a large number of students from underprivileged backgrounds, who have so far been able to both enter and successfully study in JNU. “They also highlighted the larger process of assault on inclusive public higher education, and the concerted agenda of destroying JNU. The huge hike in hostel charges is one major part of this agenda,” the statement added.

The Voyager’s Tale: A Journey Intimate Yet Strange