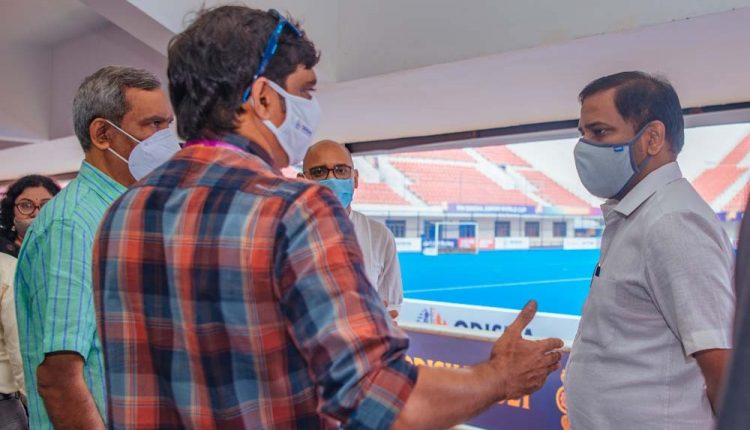 Bhubaneswar: The Kalinga Stadium in the city is all set for the Men’s Junior Hockey World Cup that will take off on November 24, said Sports Minister Tusharkanti Behera on Sunday.

Speaking to the media after a visit to the stadium to take stock of the final preparation for the World Cup, the minister expressed his satisfaction on the preparedness of the event.

“All mandatory arrangements and protocols are in place. I am satisfied with the timely execution of work. Our efforts are towards a safe and successful conduct of the event and I am confident, once again, along with Hockey India, Odisha will prove to be a great host,” Behera said.

“I am glad to know that the players have settled in well. The turf and allied facilities of the stadium are match ready and the visiting teams have commenced their training and practice matches. It is good to see this atmosphere here,” he added.

Officials of the Sports and Youth Services department and Hockey India briefed the minister about the preparations. They detailed the arrangements for COVID management, security, infrastructure, broadcasting and hospitality.

Meanwhile, all 16 participating teams have arrived in the city and are practising at the Kalinga Stadium. Pakistan team was the latest to land on Sunday.

The teams have been divided into four Pools viz. Pool A, Pool B, Pool C and Pool D. Led by senior India team member and Olympic bronze-medallist Vivek Sagar Prasad, the home team will open its campaign on November 24 against France.

The knockout matches will be held between 1 December and 5 December. The tournament will continue till December 5.

Health Minister To Discuss Low Vaccination Rates In These States