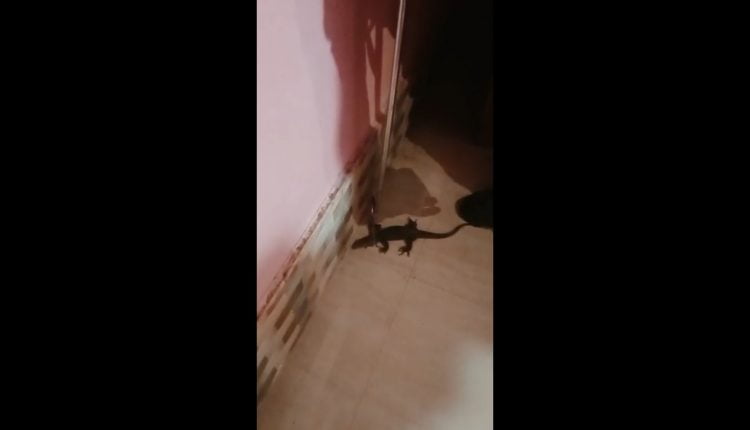 Puri: A juvenile monitor lizard was rescued from inside an air-conditioner of a private residence in the district on Thursday.

The family of Zahir Ali Khan in Satyabadi area first saw a thin bifurcated tongue coming out of the hole in the vent of the split AC in the bedroom of their house. Since the body of the animal was not visible, they apprehended that a snake may have got inside the vent and informed the Snake Helpline.

After receiving the call from Khan’s family, Sushant Behera, a volunteer of Snake Helpline, went to their house. Sushant first shot a short video with his mobile phone through the small hole on the side of the AC to ascertain what was inside. He could know that it was not a snake but a 2-3 years old monitor lizard.

Sushant gently poked the lizard with a thin stick and within minutes, the lizard jumped out of the hole and fell on the floor. He caught hold of the lizard and kept it inside a bag. Later, he released it in a suitable natural habitat.

Subhendu Mallik, general secretary, Snake Helpline said, “Earlier, we have seen many snakes being rescued from ACs. This could be the first case where a monitor lizard took refuse inside an AC.” The lizard might have climbed up to the AC through the skylight with the help of pipe outside, he added.

Last month, an adult monitor lizard that was trapped in the toilet of a residential house in Bhubaneswar was rescued by the Snake Helpline.